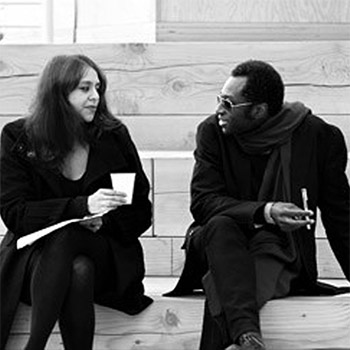 The Otolith Group is an award-winning artist led collective founded by the artists and theorists Anjalika Sagar and Kodwo Eshun in 2002.

Their work is located in the production of moving image works, audio works, performances and installations and is characterized by an engagement with research which began with the cultural and political legacies and potentialities of Non Aligned movements, New Media, Black Study, Afrofuturism, Indofuturism and thinking speculatively with science fictions of the present, expanding the notion of the essay film against the traditions of documentary form.

Their methodologies also formally incorporate post lens-based essayistic aesthetics that explore the temporal anomalies, anthropic inversions and synthetic alienation of the posthuman, the inhuman, the non-human and the anti human. The artistic focus on the essayistic and the decolonial has always gone together with an engagement with the history of futures and the futures of histories.