The first thing we notice about Amitesh Shrivastava’s paintings is that they are, above all, celebrations of painterliness; they are, in the art historian Heinrich Wölfflin’s sense, malerisch. The brushstroke is the formative unit in these works, varying in its handling of paint from a robust impasto to a velvet sleekness. It is no exaggeration to suggest that there is a legitimate Old Master intensity to these compositions, which are sumptuously layered with burnished, palpable browns, greens and blues, and pulse with events. Shrivastava’s personae emerge as apparitions in a world crafted in chiaroscuro from torrents of water and currents of flame, tides of shadow and hypnotic suffusions of afterglow.

The figures that populate these scenes, which are choreographed in forests or aquatic surroundings – and the surroundings themselves – are not premeditated in drawing or preparatory sketch. Shrivastava renders them directly on the canvas surface in oils. Paint is its own emphasis here, its tangible materiality mutating into enigmatic image without the intervention of the drawn, shaping line. In the artist’s resonant phrase, his figures “claim the space”, expanding their presence and activities to fill the frame. In the topographies that are invoked here, the land is unstable, vulnerable to the depredations of the elements as well as the greed of humankind; and the horizon is only one among several constantly shifting, menacing wave-fronts.

We feel the thrum of the life force – which Rabindranath Tagore celebrated as the jibon-debota animating the universe – in every rock, tree, stream and animal painted into these frames. Shrivastava’s is a fabular imagination – one that delights in anecdote and aphorism, is nourished by folk tale and parable. Through his pictorial narratives, the artist bears witness both to megalopolitan Bombay, where he lives, and to the rural and semi-urban ethos of Chhattisgarh in Central India, where he grew up. These stories emerge from the dark, from specific experiences that have struck him with epiphanic force; and from dreams that play through his waking consciousness. Shrivastava speaks of how they remain with him as residues charged with latent energy, like the fur that an animal leaves behind on thorny shrubs as it passes – a memory that informs Furry Path I (oil on canvas, 2021). 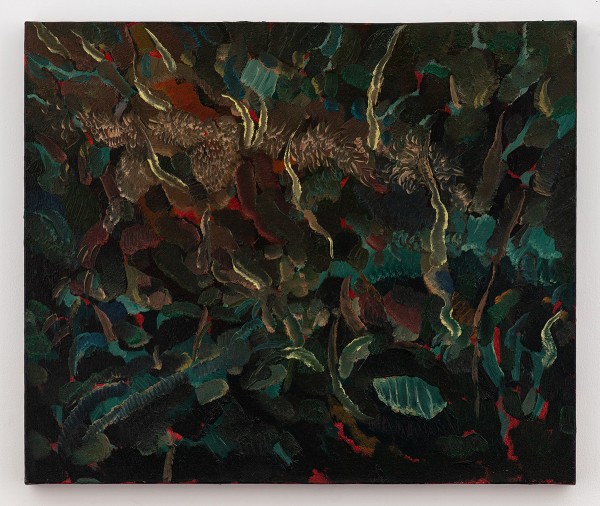 Here are situations lighted in the midst of darkness: villages crafted beneath flyovers, intimate zones within the urbanscape. Here, too, are fisherpeople negotiating the temperamental course of a river. Elsewhere, we come upon shamanic figures engaged in acts of hunting, healing, flaying, cooking, and performing rituals – acts that connect them viscerally to the cycles and symbolisms of survival in a terrain that can switch without warning from hospitality to hostility. Between land and water, as he taps the gnarled roots of forests and the storied walls of settlements, Amitesh Shrivastava narrates and annotates the unpredictable adventure of human life.

Shrivastava approaches the processes of collective life with a realist’s unerring eye. He focuses on the intimate interrelationships that conjoin life, livelihood, and habitation in his paintings – which hint at events, histories and futures without giving them away. As we traverse these frames, we are brought mid-passage into moments of encounter with the artist’s protagonists on river banks and mossy slopes. We find them in deep in negotiation or transaction, rite or reverie. These are people practising diverse occupations, who are closely connected with the world of nature, with the habitats and routines of non-human species. We meet fisherfolk, goatherds, and people climbing hillsides, perhaps looking for honeycombs or hoping to pluck wild berries. Some of these tableaux involve mysterious events and shifts of scale that articulate the numen of unmapped places; figures who wear an aura of strangeness; and everyday tasks that become invested with rich and inexplicable significance. 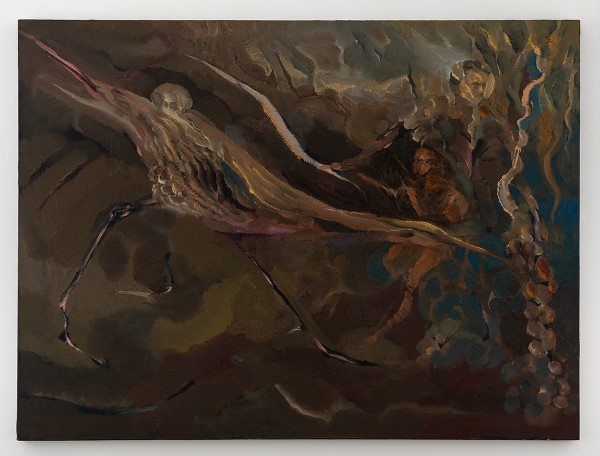 In First Touch (oil on canvas, 2021), a long-legged bird balances a skull on its back as it reaches forward to eat a fruit, while a human reaches out to caress its plumage. In Listener (oil on canvas, 2021), hunters attend a giant water bird, seemingly part grebe and part pelican. And observe the group of figures assembled around a large, unidentifiable, possibly amphibious creature in what appears to be a river, in While Crossing (oil on canvas, 2021), a painting that is profoundly redolent of Rembrandt’s The Anatomy Lesson of Dr Nicolaes Tulp (oil on canvas, 1632), translated into the deep night of rural India. Are these figures a coven of ghouls attending the passage of a soul? Or shamans performing a sombre ceremonial of passage across the elements, intoning a song about creation and dissolution that we cannot hear? 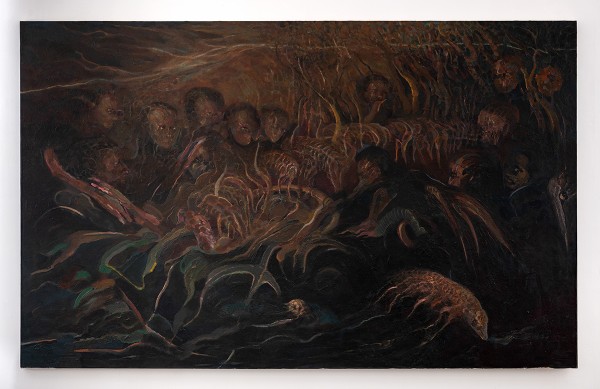 Shrivastava’s landscapes and waterscapes mutate seamlessly into each other. In Wind Dispersal (acrylic on canvas, 2021), a man on a horse bends to talk to a man seated at a desk, while what appears to be fine, gold-tinged grain pours from a sack in the horseman’s lap. Stipples of sunlight illuminate the undergrowth, which appears to teem with unseen animal life. Meanwhile, the legs of a human and the tail and hindquarters of a large animal, possibly a lion, are tantalisingly visible. In the deceptive distance of this painting, we sense the presence of multitudes. 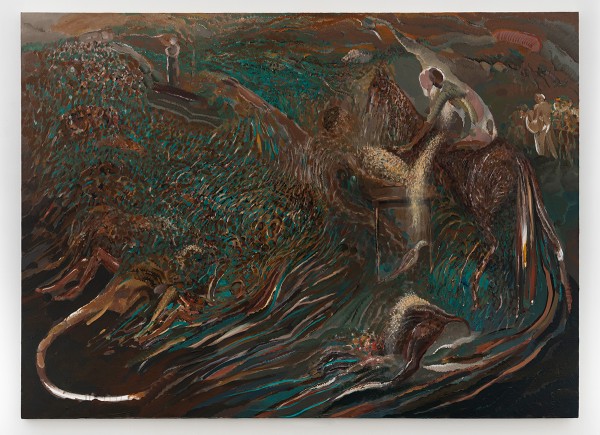 A very different approach to the imagining of terrain shapes Imbibition (acrylic on canvas, 2021), a diptych in which Shrivastava orchestrates a seismic, almost abstractionist landscape from gestures of scattering and circulation, landslide and landfall. Its inhabitants – who resemble characters in exile from the Jataka murals of Ajanta – wash clay off themselves, or hold on to rocks as though they were talismans of salvation. These unlikely Bodhisattvas assume the role of artisans of attempted stability, holding the forces of chaos at bay with their pivotal resilience.

In Folding Talk (acrylic on canvas, 2021), several figures seem adrift in a waterscape formed by momentum – floating where the waves of the river or creek take them, yet holding on to uprooted trees; a couple cling to each other and to a tree, folded into a fragile consolation against the deluge. The companion pieces, Reading Partner I and Reading Partner II (both oil on canvas, 2021), the figure of the reader is at the centre of the action. In the first work, he kneels as he reads from a large black book, distended to resemble a winnowing fan; a head rolls down the ebony page. In the second work, a pair of readers appear in the midst of a landscape that may well be a waterscape: they remain undisturbed by its surging ebb and flow. Paintings such as these remind us of how robustly Shrivastava’s expressionist handling takes its place in a lineage that goes back to the turbulent dynamism of the Viennese master, Oskar Kokoschka. In Shrivastava as in Kokoschka, the artist’s dramatis personae are shown in the grip of extreme occasions that summon the self to action – variously to anguish, imperturbability, intimacy and empathy. 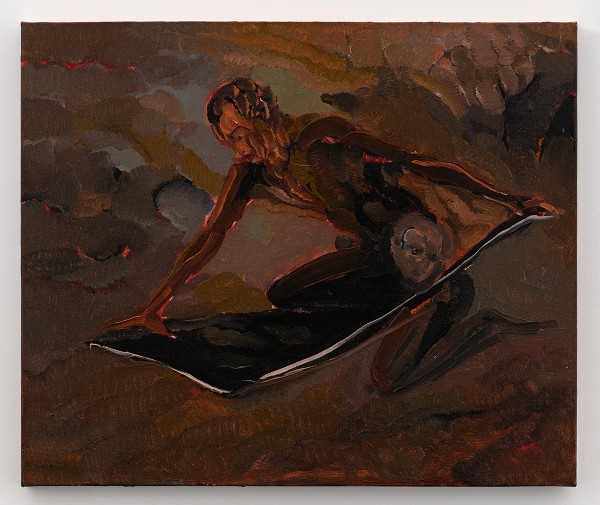 Lowliness I and II (acrylic on canvas, 2021) comprise a hymn to the ceaseless cycle of natural growth, decay, evanescence and renewal. Here, we might configure the composition as a fallen tree that has offered itself up as a feast for animals that begin to eat it, even while it retains signs of life. Its roots swirl like eddying currents or rear up like cobra hoods: fangs that strike us with a mesmeric terror even as they overwhelm us with a terrifying beauty.

In the paintings that constitute this new body of Shrivastava’s work, the world is not seen from a sovereign human point of view. On the contrary, we dismantle our privilege as self-proclaimed proprietors of the earth as we trespass upon the presence of animals here: a lamb, a bear, a crustacean, a boar. The artist’s human figures are manifestly vulnerable, at risk, struggling to survive. They are bound to his animal or marine figures both by relationships of entrenched mutual alienation and by more intuitive, redemptive forms of shared consciousness.

In Shrivastava’s ecology, humans and non-humans – as well as humans and the seemingly inanimate elements of the mineral world – are brought together by a variety of mutual tropisms, movements by which the self gears itself to the Other. As he explores the ground of an ecopoetics – an aesthetic crafted in awareness of the ecological repercussions of the human presence and its exploitative practices – the artist testifies to the suspicion between species yet also proposes resources of hope.

We take with us, from this constellation of paintings, the subtle gestures that his figures make as they touch a tree or a stone, releasing geological or arboreal memories, long petrified or sedimented into bark. Despite the wilful despoliation that we have visited upon it, the natural world can still hold out talismans to us. The earth’s capacity to regenerate itself, when spared the interference of human activity, has been vividly demonstrated by the self-healing of the environment during the prolonged global cycle of lockdowns associated with the Covidocene: the return of bird song, of species banished from urban centres, of marginalised forms of vegetation. It is evident, also, in the Demilitarised Zone (DMZ) separating the two Koreas and the flourishing flora and fauna of the Chernobyl exclusion zone. Amitesh Shrivastava reminds us that, if allowed to unfold according to its own rhythms, the natural world can yet offer us the gift of a life in which we humans are not disintegrated from our environment, not alienated from our fellow denizens of the planet.