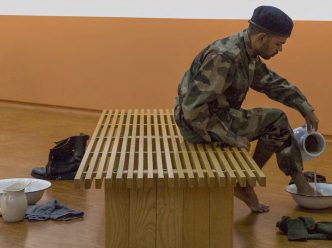 Image credit: Baptist Coelho, What have we done for you?, 2018, performance still. Photo by Hervé Véronèse. Courtesy the artist, Centre Pompidou, Paris and Project 88, Mumbai.

Over the past decade, the practice of Baptist Coelho (b. 1977, India) has revolved around the unspoken narratives and intricate trajectories of the Siachen Glacier, a conflict zone between India and Pakistan. His work also often addresses India’s involvement in the two world wars. Through extended archival and ethnographic research, he engages a variety of subjects to probe the physical, psychological, and emotional implications engendered by conflicts, wars, states of conscriptions, and acts of heroism. His works have been exhibited internationally at JSLH Art Gallery, Sonipat, India (2019); Centre Pompidou, Paris, France (2018); and Somerset House, London, United Kingdom (2016) among other venues. Coelho was awarded the Sovereign Asian Art Prize in 2016.