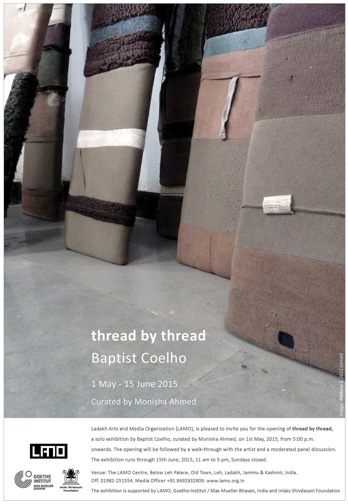 “I know that most men, including those at ease with problems of the greatest complexity, can seldom accept even the simplest and most obvious truth if it be such as would oblige them to admit the falsity of conclusions which they have delighted in explaining to colleagues, which they have proudly taught to others, and which they have woven, thread by thread, into the fabric of their lives.”
– Leo Tolstoy, “What is Art?”(1897)

The title of the exhibition, thread by thread, is taken from an essay by the Russian writer and philosopher Leo Tolstoy (1828-1910). The quote informs Baptist Coelho’s practice, which attempts to reveal and understand conflict and war through observations and conversations that have been woven into the fabric of the lives of people, whether directly or indirectly affected.

Since 1984, India and Pakistan have been zealously guarding their territories on the Siachen Glacier. Beyond the complexities and politics of war, Coelho draws his inspiration from the soldiers posted in this icy terrain, who at 17,000 feet serve their three-month terms on one of the highest battlefields of the world. These works reveal their challenges and valour, but also the paradox of heroism, confronted by brutal cold and the perils of a high altitude on an uncertain terrain, more lives are lost due to the weather than fighting.

In 2006, Coelho began researching life on the Siachen Glacier; in 2009 he presented new works in “You can’t afford to have emotions out there…”, a solo exhibition in Delhi and Mumbai. This project focused on the life of the soldier not as a machine of war but as a man with emotions and vulnerabilities. Continuing with his research over the years, he has now created six new works that draw their strength and inspiration from the various fabrics and materials used by the Siachen soldiers. These and earlier works comprise the exhibition at the Ladakh Arts and Media Organisation (LAMO), located below Leh Palace in two restored historic houses dating to the17th century. Creating this exhibition in Ladakh, positioned high in the mountains of northern India, at an altitude of 11,500 feet, allows Baptist to situate his project within the landscape that it is derived from. At the same time, it raises the possibility of interchange with the Ladakhis, who as porters, soldiers and officers, have all contributed to life on the Siachen Glacier.

Baptist’s practice has been influenced by Louise Bourgeois who once described clothing as “an exercise of memory. It makes me explore… like little signposts in the search for the past.” As the central focus of this exhibition, Baptist has re-appropriated the soldier’s clothing and discarded materials associated with the Glacier to explore untold stories. Powerful in their own right for their inventiveness and strength, these assemblages take on new meanings when juxtaposed with other materials. These works are emblematic of certain themes: humanity, relationships, survival, history, honour and perseverance. This focus results in work of intense psychological complexity, exposing relationships and hierarchies that occur during war.

thread by thread resonates with the progression of time, to the years of conflict that have passed on the Glacier. Threads collectively add greater strength and endurance to fabric, and Coelho uses weaving and stitching metaphorically, to reflect on the soldiers who have joined together to strengthen forces. The soldiers’ clothing, made from both natural and synthetic fibers, is technically sophisticated, insulating them from sub-zero temperatures (which fall as low as -60 °C). They are thus more functional than aesthetic: camouflage, protection and durability are all crucial. Obvious signs of mending and repairing on the soldiers’ clothes reveal the need to
recycle and extend the life of each garment, reminding us of broken political borders in need of repair. Baptist’s stitched and constructed three-dimensional sculptures are both symbolic and psychological: they evoke the corporeality of the body, yet are ghostly in their absence of the user.

Nowhere but here consists of thermal shirts and pants that have been stitched together to form the actual size of the canopy of an army-supply parachute, symbolizing solidarity among the soldiers. Ribbons I depicts six individual bars made of various clothing worn on the glacier. The patchwork of fabric is inspired by actual award ribbons given to soldiers and questions the relevance of these honours within the context of the army. The Rose I creates an association with the American painter Cy Twombly’s work and the roses that grow wild around the base camp of the Siachen Glacier; from which the glacier derives its name. The rose shaped sculpture consists of white gauze bandages that reveal how a fragile material can also protect and heal. Dream Speech consists of five sleeping bags, each with an audio track that intimately narrates the dreams of four soldiers and an officer; expressing their anxiety and vulnerability while sleeping in an army shelter. Attempts to contain is a study of how the mental state affects the body in the absence of clothing. A series of photographs illustrates the warp and weft of the body as a way to contain and protect itself. No one knows where or when refers to the fear of the unknown crevasses found on the icy terrains. The suspended work is fashioned out of bitumen felt, an industrial material that forms the negative space of a crevice and attempts to construct the visible and disturbing void encountered by soldiers.

Baptist’s fabric collages and assemblages, with their many disparate pieces assembled and sewn together, attest to the conceptual and psychological connotations associated with cutting, weaving, stitching, and mending. Textiles speak to us in many ways, but as narratives on life, they encapsulate experience and memory. While Baptist explores the textiles that protect the soldiers, he brings a new perspective to the understanding of what it means to live and fight on the Glacier.