Desire Machine Collective: "Krishna in the Garden of Assam" at British Museum, London 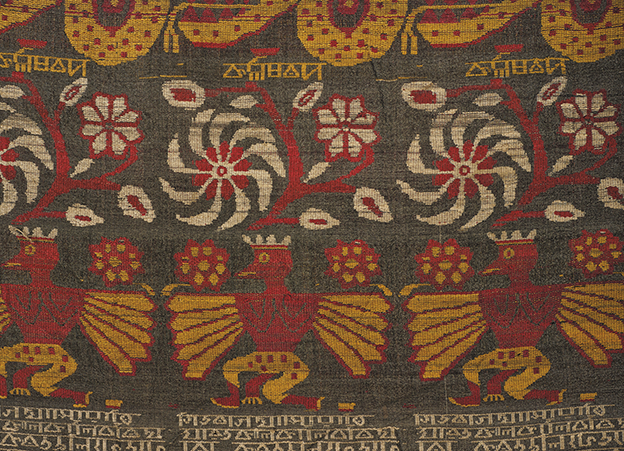 The Vrindavani Vastra (literally ‘the cloth of Vrindavan’) was produced in Assam in north-eastern India sometime in the late 17th century. It is made of woven silk and figured with scenes from the life of the Hindu god Krishna during the time he lived in the forest of Vrindavan. It was made to be used in the Krishna cult which developed following the ministry of the Assamese saint Shankaradeva (d. 1568).
At over 9 metres long, this Assamese textile is the largest of its type to survive. It is made up of 12 strips, all now sewn together. The Krishna scenes on the textile are from the 10th-century text the Bhagavata Purana, and are elaborated in the dramas of Shankaradeva. A verse from one of these is also woven into the textile, using immensely sophisticated weaving technology, now extinct in India. Following its use in Assam the textile had a second history in Tibet. It was found there by Perceval Landon during the Younghusband Expedition sent from British India to Lhasa in 1903–1904. Landon, a friend of Rudyard Kipling, was the correspondent from The Times on the expedition, and he gave the textile to the British Museum in 1905.
In the exhibition, the Vrindavani Vastra will be displayed alongside other Assamese objects from the British Museum and several important loans, including another magnificent example of one of these Krishna textiles on loan from Chepstow Museum. This survives as the lining of a remarkable item of 18th-century Anglo-Indian costume. Manuscript leaves from the British Library, masks (the making and acquisition of which have been funded by the Luigi and Laura Dallapiccola Foundation) and modern textiles will help reveal this intriguing period in Indian history.
The display will also feature two film elements – an introductory film about Assam and contemporary devotion to Krishna filmed at the 2014 Ras lila festival on Majuli island, and a new video artwork made for the exhibition by the Guwahati-based group the Desire Machine Collective. This new artwork is generously funded by the Gujral Foundation.
Desire Machine Collective: “Krishna in the Garden of Assam” at British Museum, London