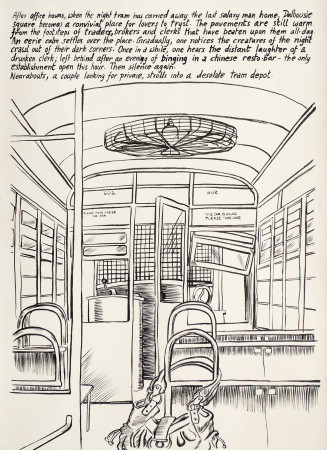 Sarnath Banerjee’s “Slow Stroll to the Edge of Town”

Thinking has changed radically, but many people don’t appear to have noticed. Our institutions have been stuck on linear Neo-Platonic tracks for 24 centuries. These antiquated processes of deduction have lost their authority. Just like art it has fallen off its pedestal. Legal, educational and constitutional systems rigidly subscribe to these; they are 100% text based.

‘You probably think of Doublethink as a negative concept. We in Russia think of it as just the beginning,’ says Russian artist, Pavel Pepperstein. The exhibition starts with Moscow Conceptualists who were not acknowledged as artists by the state in 1970s and 80s, so had to form a new way of communication and showcases a new balance in thinking between text and image through the work of 34 artists from all around the world.