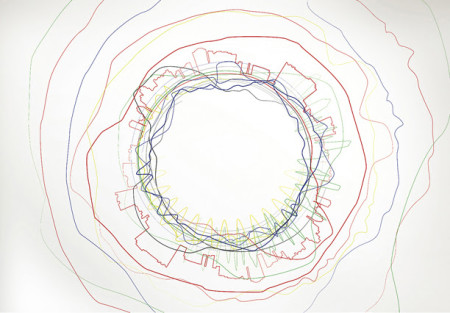 Kodwo Eshun joins Stadtklang’s Sonic Utopias at Somerset House, part of the exhibition Venturing Beyond: Graffiti and the Everyday Utopias of the Street.
Stadtklang will screen The Last Angel of History, the groundbreaking essay film on posthumanity, alienation, Afrodiasporic music, extraterrestriality and Afrofuturism directed by John Akomfrah and scripted by Edward George of Black Audio Film Collective in 1996.
This presentation is followed by a conversation between writer and theorist Kodwo Eshun of The Otolith Group and theorists Henriette Gunkel and Ayesha Hameed on the political aesthetics of The Last Angel of History and the formative role played by the film in the elaboration of Afrofuturism as a practice of cultural intervention in the 1990s and the present.
The event continues with Kodwo Eshun’s select playlist for Stadtklang giving his take on Afrofuturist sound.
Stadtklang’s regular DJs Louis Digital (Unspecified Enemies / Numbers) and Harrisment will warm up, along with live sets broadcast from Dalston based NTS Radio station DJs inspired by cities, science-fiction and utopia.
Kodwo Eshun joins Stadtklang: Sonic Utopias at Somerset House