Neha Choksi, Raqs Media Collective, Shreyas Karle – We Are Ours: A Collection of Manifestos for the Instant, Khoj, Delhi

Neha Choksi, Raqs Media Collective, Shreyas Karle
We Are Ours: A Collection of Manifestos for the Instant
Khoj, New Delhi
3 – 17 December 2013

We are Ours: A Collection of Manifestos for The Instant is an exhibition of 27 manifestos—man is the Latin root of hand, which is comprised of 27 bones; 27 is the number of letters in the Latin lexicon (in 1837, ‘&’ was said to succeed ‘Z’; some years ago a Danish alphologist discovered a missing letter tucked between Q and R, the letters utilized to denote variables within the logic of philosophy); 27 is also a perfect cube representing the earthly cosmic Pythagoras and Plato alike—created by contemporary Indian artists.

Historically, manifestos were made on the brink of great revolutions, of wars and the end of wars, of individuals seeking a collective voice and a mass dispersal of a firm statement of sentiment, solidarity and safety. They are now a somewhat antiquated form, perhaps irrelevant, perhaps already omnipresent. The purpose of commissioning aesthetic manifestos was to create a constellation of manifestations of the ideas that lie between the artist and the history of art, its institutions and its socio-cultural origins, between the person and the existential, and finally to place them in a more poetic, other-dimensional space where the image of what they have to say transcends the meaning of what it says.

The list of artists includes a selection of artists whose practices are founded in their conceptual and philosophical engagement with the ways we live within forms. They will be utilizing the common form—in function or in idea—of the A4 sheet of paper, a studio standard, a reproducible flyer, a simultaneous symbol of the dawn of industrialization and its demise in the face of a digital revolution.

The manifestos are twice reflexive: they are both abstract objects and literary texts, becoming art as well as a reflection on art, being a manifesto and a reflection on the idea of a manifesto. Even to create an anti-manifesto, to say that the form of a manifesto has somehow been exhausted, is a manifesto. The collection is aware of its own historicity even as it is present now: standing for a pause, an interruption or a celebration amid the larger throes of the universe, the planet, a nation, a consciousness and all its parts and everything that keeps it apart.

This is the coda. 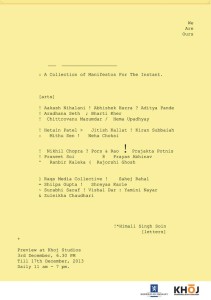