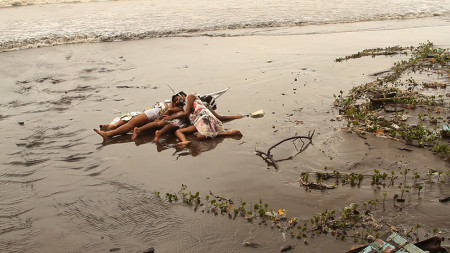 In a reversal of contemporary exhibition practices, this program presents single-channel video art and installations in a repertory film space, and suggests novel ways of considering bodies in movement. These bodies are neither discrete nor constant; they challenge borders and boundaries, and prefer entanglements with other species and other kinds. Varied in their consideration of the digital and in their use of performance practices, the works are primarily by artists living in Mumbai, Goa, and New Delhi.

A woman lies among pigeons in a public plaza in Logic of Birds, her body hospitable to their pecking and fluttering; man and bird merge in a play between painting and video in Man with Cockerel; an island sets the stage for bodies becoming other in Fjaka; and melting ice clocks the duration of a row in Iceboat. These performances of time and in space offer new utopias: a universe inhabited by myth and desire is the setting for the queer eco-fable Between the Waves; ancient ruins and spaceships offer a promise of time and space travel in the Forerunner; and a landscape comes to life in the liminal time between digital and analog in Night Noon.