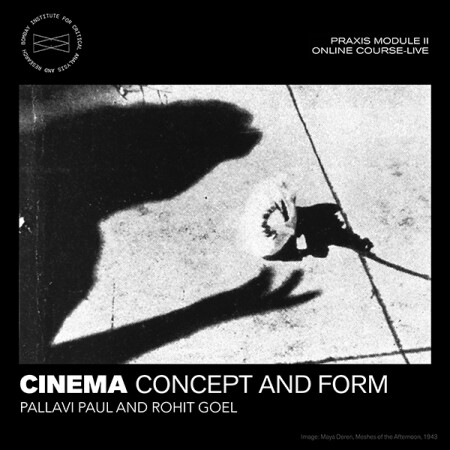 In this course, we will introduce foundational concepts and forms of cinema, cutting across time, space, and genre. We’ll see and discuss ‘Westerns’, film noir, verité and neo-realism, documentary, the experimental and avant-garde, as well as contemporary art installations of moving images. Our discussions will traverse geography – America, the Soviet Union, Europe, South Asia, the Middle East and North Africa – method– structuralist, post-structuralist, and psychoanalytic – as well as history – the long 20th century. We’ll also pay mind to techniques of making and viewing film.

Students needn’t have a background in cinema to take the course. You can choose to attend or attend and write an academic paper or short screen script with supervision, followed by a ‘crit’. Requiredand recommended reading and viewing will be provided upon registration.

Pallavi Paul works with video, performance, and installation. Her practice speaks to poetic exploration of cultural histories, questioning the limits of speculation and facticity and evidence. Paul is also engaged in thinking about ideas of the archive, tensions between document and documentary and the implication of trace within these openings. She has received her PhD in Film Studies from the School of Arts and Aesthetics, Jawaharlal Nehru University, New Delhi. Paul’s work has been exhibited in venues including Tate Modern, London (2013); AV Festival, New Castle (2018, 2016), Beirut Art Centre, Lebanon (2018), Savvy Contemporary (2019), Contour Biennale, Mechelen (2017), New Alphabet School, HKW (2020). She currently lives and works in New Delhi.