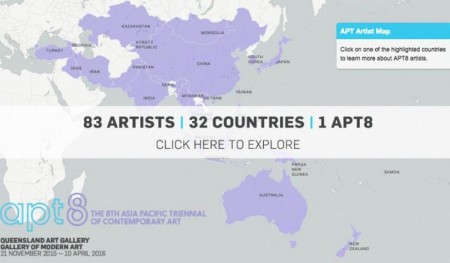 Brisbane’s Queensland Art Gallery | Gallery of Modern Art (QAGOMA) has announced an exciting list of 83 artists from 32 countries for the 8th edition of the world’s largest exhibition focused on art from Asia and the Pacific, the Asia Pacific Triennial of Contemporary Art, which will be on display at QAGOMA from 21 November 2015 to 10 April 2016

“The 8th Asia Pacific Triennial of Contemporary Art” (APT8) will once again be held across two galleries, occupying all of GOMA and key spaces at QAG, including the iconic Watermall. The exhibition will feature new large-scale sculptures, immersive installations, interactive performances, and kinetic artwork, complemented by an extensive schedule of thought-provoking public programs.