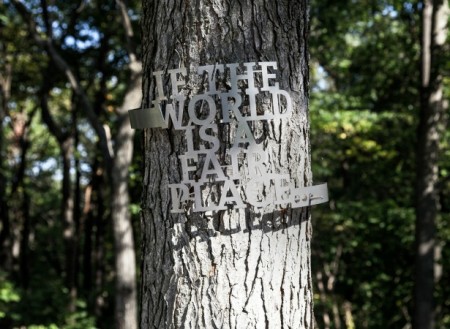 Laumeier Sculpture Park announced Raqs Media Collective: “Art in the Age of Collective Intelligence” as the inaugural exhibition in the Whitaker Foundation Gallery of the new Adam Aronson Fine Arts Center. The indoor exhibition, plus an outdoor commission by Raqs entitled If the World is a Fair Place Then…, will run October 16, 2015 through February 14, 2016.

The Raqs Media Collective consists of three media practitioners—Jeebesh Bagchi, Monica Narula and Shuddhabrata Sengupta—based in New Delhi, India. Art in the Age of Collective Intelligence consists of a large series of photographs and a constructed library of books expanding on Raqs’ ongoing preoccupation with change from the inside. Layered texts within the photographs and books examine the ideas of “fairness” and “unfairness” using cut-out fragments of passages as shadowed insertions, leaving both physical and contextual marks.

“If the World is a Fair Place Then…” is an outdoor commission inspired by the more than 500 responses to the prompt gathered by Laumeier in 2014. 40 stainless steel bands etched with various thoughts, feelings and ideas from the responses encircle tree trunks along Laumeier’s Art Hike Trail, exploring Raqs’ interest in the history of World’s Fairs—especially the 1904 World’s Fair in St. Louis—and the polyphony of the crowd.