Collaboration in scenography, choreography and performance with Zuleikha Chaudhari.

The Last International is a deep sea dive, head-first, into the future and into infinity.

Raqs Media Collective’s commission for Performa 2013 revives Karl Marx and Friedrich Engels’s idea to move the Council General of the First International Working Men’s Association to New York in 1872. Their performance-installation The Last International  articulates a political aesthetics based not on petition but on proposals. The work stages debates, a wine drinking symposium on time, invokes a runaway rhinoceros, a time traveling bicycle, a conversation between a yaksha and a yakshi, as it turns mathematics and botany into poetry and creates a ruckus out of concepts, questions, symbols and totems. 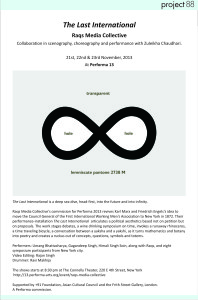