Sydney Morning Herald: Cinema and sci-fi flicker into view in the best of gallery offerings 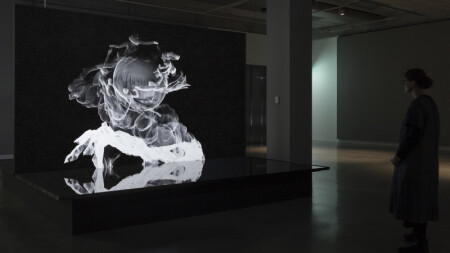 What can science fiction in contemporary art tell us about our present and future, and the colonial, evolutionary and planetary implications of how we live? This is the starting point of Xenogenesis, the first major Australian showing of The Otolith Group. Multimedium artists Kodwo Eshun and Anjalika Sagar blend sci-fi imagination and documentary styling to reflect current global crises. While the rhetoric is urgent, the exhibition’s five artworks are almost stoically slow. Medium Earth, 2013, considers seismic forces beneath the Californian desert with a narrator whose bodily pains are linked to underground movement. This is extended with prediction letters to American geological institutions written by laypeople warning of earthquakes, drawing evidence ranging from the pseudo-scientific to intense intuition; it’s the unconscious effects of living in a time of impending disaster. The most captivating video, Sovereign Sisters, 2014, appears as a ghostly hologram of women in flight around a rotating orb: it’s a hauntingly ambivalent scene of global connection. Installed with a sci-fi aesthetic, the exhibition’s underlying premise feels like the strongest point: in an alienating world, the only tenable position for introspection is the alien itself.