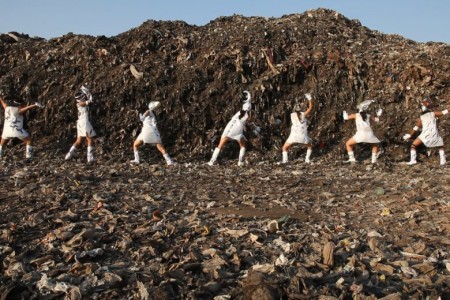 Lecture performance
Wednesday, October 25, 6:00 pm
Tejal Shah and Shabnam Virmani in conversation
HFBK Hamburg, Aula, Lerchenfeld 2, 22081 Hamburg
The artistic practice of Tejal Shah (* 1979, Bhilai), a native of India, includes video, photography, performance, drawing, sound and installation. Their work provides a complex picture of the reciprocal relationships between gender, ecology, science, sexuality and consciousness. Shah refers to queer, feminist as well as Buddhist concepts in her confrontation, and in this context generally challenges dualistic categorizations (such as man / woman, man / nature). In doing so, it involves relevant considerations on violence and power on the one hand, and on love and regeneration on the other. The artistic position of Tejal Shah is particularly impressive against the backdrop of her home country of India and is characterized by outstanding quality and independence.
At the Kunsthaus Hamburg, Shah will release their 5-channel video installation Between the Wavesspace. In the installation, which had premiered at the dOCUMENTA (13), the artist developed her vision of a world that breaks with the traditional notions of physicality and consciousness and in which the boundaries between man, nature, culture and other species dissolve , In their uncompromising search for closeness, the beings depicted in the film form quite intuitively and intuitively to ritual encounters. The artist presents her radical world of ideas as utopia and dystopia at the same time. In addition to the video installation, the Kunsthaus Hamburg presents thematically linked collages as well as a series of new drawings dealing with the Bodhisattva as an essential figure and ideal of Mahayana Buddhism (original: the Mahayana Bbuddhist ideal of the figure of the Bodhisattva).
In cooperation with the Hochschule für bildende Künste Hamburg HFBK (Prof. Michaela Melián), Tejal Shah will present two film screenings on the specific cultural context in which her work will be created. As a special guest, she has invited the Indian director and singer Shabnam Virmani, whose films she will also present and explain in an artist talk. In the works of the two artists you can find many thematic and mental connecting points. Together they will present a one-day workshop for the students of the HFBK.
Insight into their current research will give Shah in the form of a lecture performance on October 25 at the HFBK. For over two years she has been intensively studying the foundations of Tibetan Buddhism and the philosophy of the “Middle Way”, which is due to the ancient Nalanda University. It thus links to a still living spiritual tradition, which the artist describes as one of the most sustainable and scientifically linkable perspectives on reality and consciousness. The special interest of Tejal Shah is the practical application of the findings of this Buddhist knowledge complex and its relevance to the possibility of a life in harmony. She will report on her special form of artistic “research” in Hamburg for the first time and will present her work as well as Shabnam Virmani in a presentation. As a supplement to the exhibition, this will provide a special insight into the workings of the two artists, who in their own way have a critical as well as decisive connection with the cultures of India.
TEJAL SHAH : UNBECOMING – KUNSTHAUS HAMBURG
Share