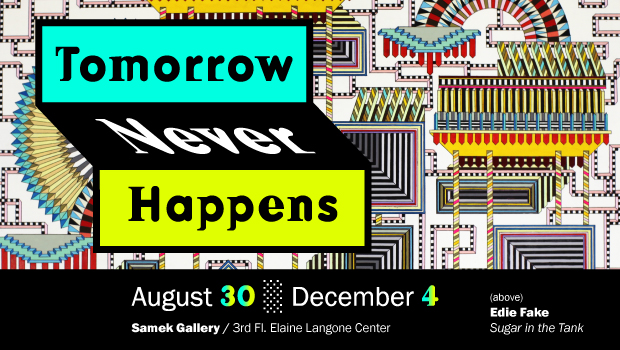 This exhibition explores queer futurity and the aesthetics of utopia.
From marriage equality, to “bathroom bills,” to the massacre in Orlando, queerness is central to current social and political life. Current events can mire us in an unrelenting present that makes it hard to imagine a path beyond.
A rising chorus of artists is asking where do we go from here? How do queer communities imagine and work toward a better world? And how do queer theories, artistic practices, and lived experiences influence broader cultural thinking about the future?
The artworks in this exhibition represent a diverse range of sexes and sexualities, gender identities and expressions, national origins, and aesthetic sensibilities. Each work speaks with its own voice and they point down many possible paths to queer futurity. In some works, sexuality and sexual imagery are exposed as politics. Some works invoke collective strength and a sense of shared destiny. And others code utopian messages into history, mythology, and culture. Together, they suggest that our best hope may be to queer the future.
“Tomorrow Never Happens”: Tejal Shah at Samek Art Museum, Lewisburg