Xenogenesis presents a sampling of the Otolith Group’s works from 2011 to 2018, on view from February 22 to May 10. Admission is free and open to all. 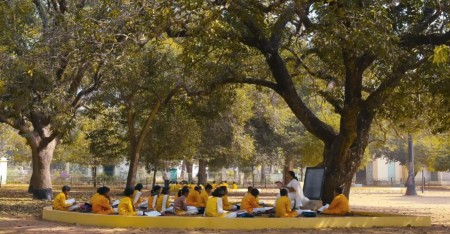 The ICA at VCU is proud to present the first major solo exhibition of the Otolith Group’s work in North America, which is the only opportunity to see the exhibition in the United States.

Xenogenesis presents a cross-section of the Otolith Group’s works from 2011 to 2018. Part fiction, part documentary, these films and installations address contemporary global issues: how humans have shaped the natural world; what “we” have inherited from colonialism; the unresolved histories of global Asian and African diasporas; and how “we” are changing in response to new technologies.

The term “xenogenesis” alludes to science-fiction novelist Octavia Estelle Butler (1947–2006) and her classic Xenogenesis Trilogy (later retitled Lilith’s Brood). While Butler does not appear directly in this exhibition, her work provides deep inspiration for the Otolith Group — especially the titular concept of “becoming alien” or “alien becoming.”  Along with Butler, two other figures are key to the exhibition: avant-garde composer and pianist Julius Eastman (1940–1990) and the philosopher and social reformer Rabindranath Tagore (1861–1941). Together, the works in Xenogenesis reflect The Otolith Group’s commitment to using images and sound to create a “science fiction of the present.”

Established in London in 2002, the Otolith Group consists of artist and theorist Kodwo Eshun (b. 1966) and artist Anjalika Sagar (b. 1968). The group takes its name from otoliths: calcium carbonate microcrystals located within the middle ear that sense gravity, balance, and movement.

The Otolith Group: Xenogenesis continues at the Institute for Contemporary Art, Virginia Commonwealth University (601 W Broad St, Richmond, VA) from February 22 through May 10, 2020. The exhibition is organized by the Van Abbemuseum, Eindhoven, the Netherlands, where it was first shown, and is curated by Annie Fletcher.