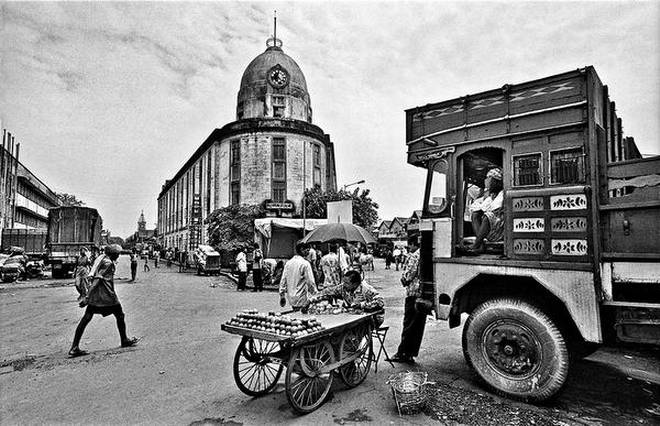 In 1999, with the encouragement of late historian Sharada Dwivedi, photographer Chirodeep Chaudhuri put together his debut show featuring 20-odd shots of clocks scattered around South Bombay. The passion project has continued for more than two decades, crowdsourced via email, text, Instagram, and Whatsapp. Chaudhuri has also come across clocks rather serendipitously: whether stuck in a traffic jam, overhearing conversations in public places, flipping through novels about the city, or dropping off a co-passenger in an Uber Pool. “Some of the stories are rather bizarre,” says the photographer and city chronicler. “I remember travelling in a cab with my student and coincidentally stopping outside the Anand Niwas building. Lost in conversation, she asked me how I usually find these clocks, and I told her, ‘You never know, you might look up and just find one’. Sure enough, there stood the clock at Anand Niwas!”

After a span of two decades years since his debut, Chaudhuri returns to clocks with an ongoing show at the Max Mueller Bhavan (part of the ‘Women In Design 2020+’ conference organised by the HECAR Foundation and Somaya and Kalappa Consultants). Seeing Time: Public Clocks of Bombay is birthed through obsessive observation, featuring 81 public clocks. “By now, I can say with surety that there must be only two-three existing clocks that I still haven’t found,” says Chaudhuri.

In his photographs, we see popular working timepieces at the Victoria Terminus booking counter, Crawford market, Mumbai Central Railway Station, and the David Sassoon Library, among unnoticed clocks dotting the edifices of the Christ church School at Clare road, Byculla, the Indian Sailors’ Home in Masjid Bunder, the sundial at Kamala Nehru park, and the eighteenth Portuguese sundial at Manor House, Bombay Castle.