ARTIST SHREYAS KARLE TAKES OVER THE WINDOWS OF SPLENDOUR – Editors

“We thought let’s think outside the box,” says Betancourt, the creative director of Splendour who came up with the idea of turning the window displays into an art exhibition space along with the store’s owner Sharan Parekh. “Let’s get an artist to do an intervention in the space and develop it into a programme. We have a line-up of artists to do one every three to four months.” To be sure, it is ultimately a window display for the store – watch some of the videos closely and every once in a while you’ll see the subliminal flash of a fabric sample – but one that’s less a cue to a passerby to buy something than to really just stop them dead in their tracks. “We’re creating a bit of surrealism” says Karle. “So even if someone walks on the street and sees it, it should make them think for a while.” 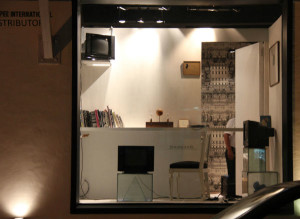 Artist Shreyas Karle Takes Over The Windows Of Splendour