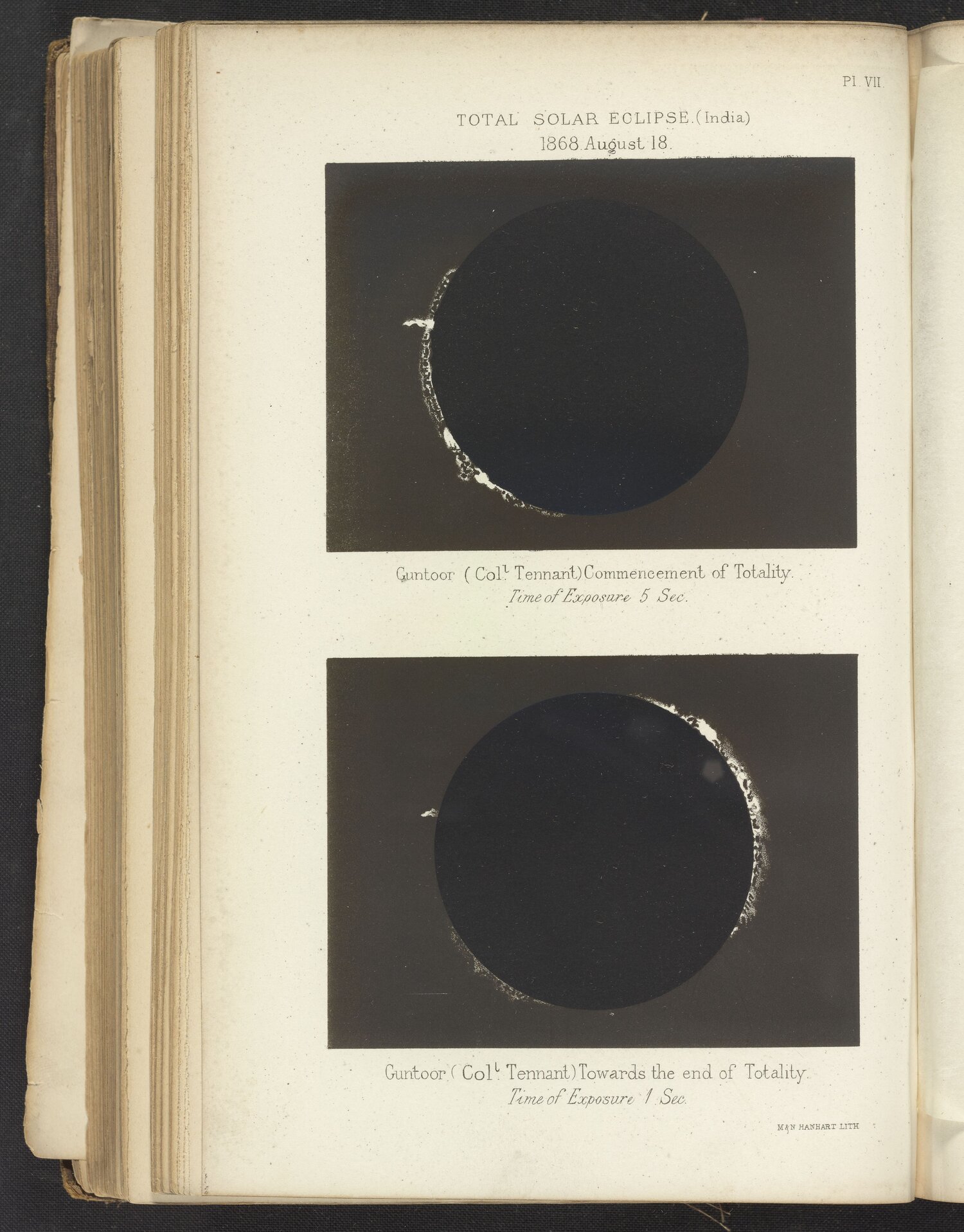 Prints from photographs taken by Colonel James Francis Tennant (1829-1915). The upper picture shows the eclipse at the moment of totality, and the lower one immediately before its cessation. Observed from Guntoor, India. Total Solar Eclipse Observed from India in 1868, Pl. VII, published 1872, courtesy Science History Institute.

“THE MOON, inconstant in appearance but constant in presence, is often seen but rarely looked for. Sometimes the wash of its light on buildings or landscape prompts you to seek it out in the sky; sometimes the clouds lit by its glow are hard to miss. More often, though, you just come across it unexpectedly. I see the Moon as much by chance, I think, as by design, catching it from the corner of my eye. This is appropriate. The Moon is essentially peripheral.  It is rarely anybody’s central concern, as a mountain or a sea might be a person or a nation. It is off to one side, a lesser companion tagging along through the years. It differs from the rest of the yet further cosmos only by being close enough to see by day. In other ways it is as distant and as ineffable a part of the sky as the stars beyond. But it is not just the nearest outpost of the elsewhere; it is also the furthest reach of here. It is in thrall to the Earth, its face cupped by the hands of gravity so strongly that it cannot turn its gaze away from ours. It is near enough for its pale fire to light the night, for its pull to raise the waters, to take the blame for madness. Its material is the same as that beneath our feet, and human feet have trodden it there as we do here. It defines the sky. It completes the Earth.”[1]

Alexander von Humboldt recorded “It is a map of the Earth… what we see on the Moon is ourselves.” There is no map; but what people see when they look at the Moon is indeed, for the most part, a reflection of themselves—of their preoccupations and theories, their dreams and fears. It has been used for such reflection, or projection, in science and fiction alike. The history of the Moon is a history of ideas about the Moon; and it is from those ideas that its future will grow. The Moon, always marginal, is hard put to support meanings of its own. It is there to be filled with the concerns of the big bright world that shines down from its jet black sky.