BETWEEN THE ORGANIC AND THE CONSTRUCTED – TEJAL PANDEY 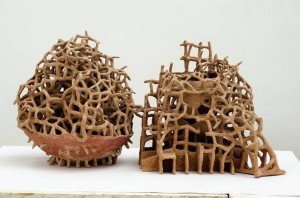 A friend who recently travelled to Cappadocia in Turkey, described how the gigantic rock formations — volcanic remnants, have over time turned into homes, hotels and churches. One realises how the evolution of a place geographically and culturally is also the evolution of civilisation. The ongoing art, Civilization and its Material Contents, attempts to explore the story of civilisation through the work of three contemporary artists working with clay. Spread across the gallery in a sparse display, the works study the shifting landscapes of cultures through portals of time and man’s relation to nature and habitation.

Civilization and Its Discontents, Sigmund Freud’s 1929 work, from which the show’s title derives its name, was written in the midst of the two world wars. At a time when civilization itself was on the brink of self-destruction, the term was reduced to a hollow spectre of its true self. Artist Neha Kudcharkar explores the world we currently inhabit, with its concealed wars that leave in its wake displacement, loss and destruction. As also traces of dreams, ambitions and innovations. Taken from her larger project Somethingpolis, the exhibits are a dialogue between her terracota creations and photographic prints shot across four cities — Mumbai, Jaipur, Ljusne and Hebron. The project, explains Kudcharkar, is “Marked by the movement and the stagnation of people. A documenter of stories and histories. Of mistakes and genius. Of sense and nonsense.”

Currently showing also at the first ever Indian Ceramics Triennale in Jaipur, the artist deconstructs what makes physical settlements possible. Bits of building material resembling metal rods form a maze on the gallery floor. One walks through them, like one would through an urban ruin. “In Somethingpolis, I am thinking of [the] history of clay as construction material. Of the fact that with the standardisation of the clay brick, cities could be imagined and built,” shares Kudcharkar. But cities are built as much from the tangible as from the intangible, as her photo prints show. Barbed wires, rubbish filled alleyways, walls with chipping paint, signboards and wall cracks, are symbolic of the history of habitation and also of constant change.

As one moves to Khageswar Raut’s works, one feels drawn deeper into the layers of time. Of creation and of disintegration. Between the ‘Study of Nothing’ and the ‘Study of Things’, Raut delves into interior spaces of objects and monuments, of the organic and the constructed. “The inside structures of vegetables, flowers, pods and seeds fascinate me more than their external features because, the former generates greater elements of surprise and curiosity than the latter,” reads his artist statement. A cotton seed cut into halves could be a starfish, the peeling cadamba flower perhaps planet Earth, shedding its billion years worth of skin.

“The timeless aspect of terracotta had attracted me, how an object from our everyday seems to be of another time, as if it existed from an earlier civilization…”, states Mahesh Baliga, the third artist of the trio. Set aside on its own corner table, Baliga’s work turns to the materiality of clay in rendering new meanings to objects and ideas. Reflecting on what is in man’s control and what isn’t, the belt around the ripe jackfruit denotes the human need to levy control on nature, while the flame burning wild besides it points to an innate freedom. Baliga’s works run alongside a parallel narrative that demands one sees the everyday anew.

Civilization and its Material Contents is ongoing at Project 88, Colaba until October 15…”

BETWEEN THE ORGANIC AND THE CONSTRUCTED – TEJAL PANDEY