In conversation with Melissa Keys 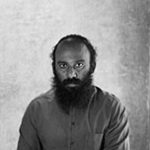 MK: Often assembled from rudimentary found, made and reformed objects and materials alongside drawings, prints, videos and poems, your suggestive and yet enigmatic works are variously witty, fantastical and perplexing. What is the role of humour and the absurd in your practice?

SK: I believe the ‘function of art’ in society has always been unclear. If one tries to make sense of the ‘artistic practice’, one finds that it does not adhere to any logic (as opposed to that of a medical practitioner, legal practitioner, etc.). In fact, it benefits from certain manipulative tendencies and its infinite absurdness. If we try to understand the universe the way it’s been taught to us, we are not able to imagine the farthest bodies and their actions, that either govern the attitudes of time or are governed by time itself. We have to present ourselves as non-intellectual beings whose absurd claims seem humorous to begin with but as these shift into a distant (future) reality, their absurdness will be considered as rational as any philosophical, anthropological or psychological inquiry.

The purpose of art-making is never a proposition of the present or the past, neither is it of the future. It dwells in a certain timelessness and lightlessness (a state where light is present but its source is absent), only to be understood not in itself, but outside of it.