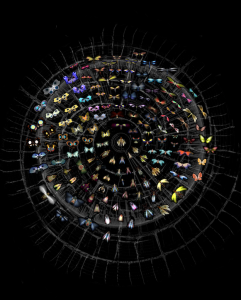 “I don’t think we’re looking at a plant,” Whitby says, tentative, at one status meeting, risking his new relationship with the science division, which he has embraced as a kind of sanctuary.

“Then why are we seeing a plant, Whitby?” Cheney, managing to convey an all-consuming exasperation.

These questions, excerpted from Jeff VanderMeer’s novel, Acceptance: Southern Reach Trilogy, fade in and out of a wall at Hopeful Monsters, New Delhi-based artist Rohini Devasher’s ongoing solo exhibition. They ask a viewer to reconsider what we take for granted about the world we live in. In front of these barely there lines of wall text lies a series of cabinets fitted with screens facing up at the viewer, each a distinct biological order — taxonomic ranks used in the classification of organisms. These include Odonata (Dragonflies), Lepidoptera (Butterflies), Hymenoptera (Bees), Diptera (Flies), and Coleoptera (Beetles). According to Devasher, these taxonomic orders show an amazing diversity of patterns. This diversity is thought to arise through novel switches in the genome that turn genes on in new contexts, thereby producing new patterns. They are therefore the perfect place to begin to understand morphology.

Understanding morphology is key to Hopeful Monsters — which is a culmination and evolution of her interests — the passage of time, astronomy, evolution, biology. “To me there is a clear link through all this,” she says over email, drawing lines between her interests and their contribution to her praxis. “Where we as the (so far) sentient species on this planet, filter experience and environment. The images we see and make, the stories we read and tell, literally define how we see and understand the world.” This thought sinks into the work we see in the current exhibition.

Opening the exhibit is a series of 12 unique drawing and print works, each a set of two resembling old hand-drawn studies of the natural world: Classification and identification data, complete with drawings or pressings of specie samples. The Atlas Phaenogamia or The Atlas of Mimetic Flowering Plants as Devasher names the work, uses as its base specimens from the R. L. McGregor Herbarium at the University of Kansas, deposited as far back as 1893. In this series, Devasher ‘tweaks’ plant forms, creating from them images that both mirror and mimic themselves and an array of species including snake, butterfly, cicada, spider, frog and so on. In this way, Devasher immerses, slowly but surely, into speculative fiction, the kind that looks at possibilities for a consolidated future that considers nature as a composite made up of human action as much as it is by the inherent desire of the living world to survive despite the challenges collective human consciousness throws at it.

“Reading Jeff VanderMeer has been a revelation in this context. His Southern Reach Trilogy is an astonishing piece of writing which has been termed as the ‘new weird’ or ‘ecological weird’, because ecology is weird,” says Devasher, in response to the suggestion that her work classifies as speculative fiction. The Southern Reach Trilogy has found takers already, and its first book Annihilationhas been made into a film featuring Natalie Portman and others, and released on Netflix in February 2018 to great acclaim. The desire to evolve, grow and become exists as much in plants as it does in humans, in the various identities we seek, be it via cosmetic or more structural changes to our individual persons. VanderMeer’s trilogy talks about nature in opposition to man. “A real awareness of what is happening requires a realisation of this weirdness, which may well be frightening,” contends Devasher, adding that the trilogy offers a possible perspective of what might happen if the ‘other side’ won.

What happens should the other side win? Step further into the gallery to find out. One of the three large wall pieces — a combination of print and wall drawings — done for In the Open or in Stealth – the Unruly presence of an Intimate Future curated by Raqs Media Collective for the Barcelona Museum of Contemporary Art in October 2018 explodes out of a wall. The creature bursting out from this wall is an amalgam of a number of species, should they come together and decide to ‘’get back’ at the world human beings have wrought.

A hundred steps ahead of those movie scientists creating smart but evil sharks, Devasher’s mad genius brings a mishmash of plant and animal species to life. From eyes and teeth to roots and thorns, the creature coming at you from this gallery wall is all offense, all the way. It challenges you to look into what seems to be the vengeance of the natural world, and that vengeance, it seems to say, is coming. There is no time to turn that dread doomsday clock back, but that doesn’t mean the planet won’t continue without us.

Some days after the opening of the show, Devasher speaks to us about the albino redwood. As the name suggests, the tree is the albino version of the redwood. Essentially, it’s an all-white redwood. A few quick searches will have you thinking the same thoughts Whitby and Cheney are thinking in the excerpt above. The albino redwood produces no chlorophyll — the thing that we knowmakes a plant a plant, we know this right from the beginning, from our childhood school texts, and that knowledge keeps us safe in our worldview.

What is green and has chlorophyll is a plant. Devasher, through her work in general and Hopeful Monsters in particular, seems to be interested in dragging us, perhaps kicking and screaming in terror at all the bugs she employs to do so, out of that safe corner, and into the possibility of a brave new world. The Mad Max frontier where living creatures evolve and mutate, to survive or flourish.

Hopeful Monsters is ongoing at Project 88, Colaba until January 12, 2019