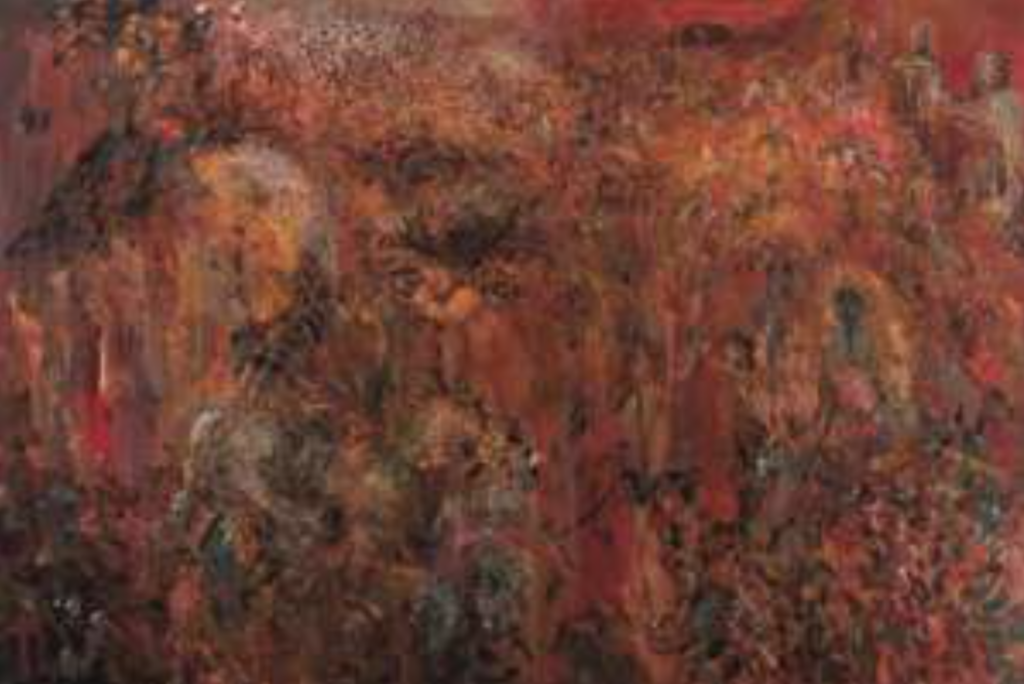 “Amitesh Shrivastava’s large canvases at Mumbai’s Project 88 pulsate with energy. Fiery hues sweep, swirl and drip as tex-tured surfaces meld and disintegrate. Fractured landscapes, infested with strange flora and fauna, seethe and shift as if animated by simmering undercurrents. Amorphous figures swell into teeming faceless mobs that appear ominous yet curiously docile. In Trespassers and Translators, on view from the 10th of August to the 12th of October, Shrivastava’s expressionistic brushstrokes simultaneously conceal and reveal fragmented narratives that address the contradictions and complexities of our times.

For Shrivastava, the notion of ‘trespassing’ is both physical and notional. A scene he often witnessed while growing up in a remote town in Chhattisgarh involved people from tribal com-munities assembling at the local government office to appeal to powerful officials. He evokes this memory in Assignation where hazy figures blur and blend with the distorted landscape.

Nebulous images drawn from the urban churn and grind of Mumbai, where Shrivastava currently resides, are seen in Translators 1, which comprises a jungle-like setting with ambiguously formed furry creatures. A clutch of figures on the top left of the canvas faces a group of preachers placed on its right. Shrivastava ‘found’ the image when he wandered into a church where the priest was talking about Christ’s encounter with a bear, first in English and then in Marathi. The translation set off visual cues that allowed him to re-im-agine the scene in familiar contexts.

Amidst evocations of dystopia, Shrivastava turns to portrai-ture in a striking work titled Kissing the Corner that depicts an enigmatic face in profile. Rendered across the entire space of the canvas, the subject seems suffused

with a manic intensity…”

Published by ART India, The News Magazine of India.