The Hindu: How political is the normal? 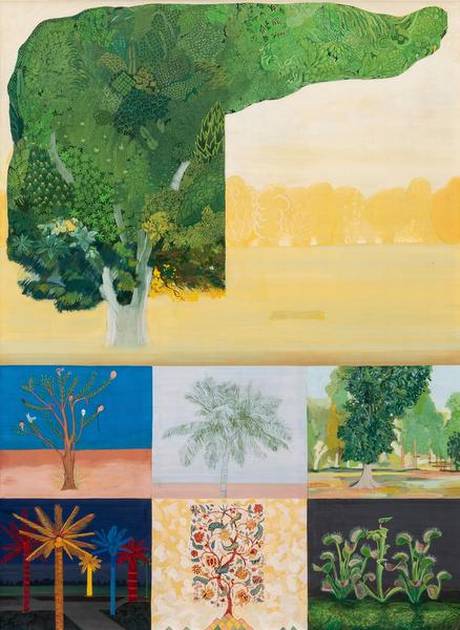 ‘It’s a normal day…’ Mahesh Baliga’s fifth solo exhibition at Project 88 features the artist’s works that showcase his unrelenting concern with everyday happenings. Baliga uses matter-of-fact, playful, and semi-satirical imagery to divulge dissonances within regular days that have been overlooked or ignored, while making a strong case for the relevance of painterly practices. Entering the gallery, one is taken by the impressive display of evenly-sized, small-scale paintings that are exhibited cinematically across two walls of the space and juxtaposed against larger paintings by the Vadodara-based artist. The viewer is compelled to pay attention to the conversation between these works that highlight “Details that have been missed from the day-to-day framing of images of importance — of violence, pain, loss, and love.” Mythological subjects, intimate indoor scenes, depictions of nature, the built environment, and references to Baliga’s artistic identity are brought to the forefront. The artist invites considerations of his painterly medium, the construction of narratives, and idea of normalcy.

Baliga works with casein, a by-product of milk, mixed with pigment that achieves an intensity and vibrancy that cannot be realised by synthetic colours. He was introduced to the medium while working as a production assistant at senior artist, Nilima Sheikh’s studio and acknowledges in an interview that, “How the paint behaves,” is a question that continues to drive his practice. Allowing his medium to determine the depth and dimensionality within his paintings, Baliga also abandons a strict adherence to realistic perspectives to re-examine regular sights with scrutiny and imagination. Using vivid colours, he captures essences of still moments and dynamism across his paintings, inviting a contemplative form of viewership. The artist expresses in the press note, “The daily practice of painting is often found redundant in the present context; it is normalised/standardised as something of the commonplace. This is the primary action which I consciously retain.”

His paintings draw formally from sources such as Edward Hopper, Caravaggio, post-Impressionists, Ukiyo-e prints, and Persian miniature paintings. In his paintings, Pagala Gach (Ptergota Alata) and Gaze Chart, Baliga also reveals his consideration of children’s charts as reference material for the manner in which he explores numerous ways of depicting trees and fountains, respectively. Some of his paintings furthermore, pay tribute to artists including Nilima Sheikh and Raqs Media Collective, revealing his engagement with art practitioners. Painting enables Baliga to straddle serious subjects, banality, and deliberate humour while exploring the structures of visuality. “The delight of making” remains at the core of his practice; “I cannot sleep without making a painting,” he expresses.

Today is the last day to see Mahesh Baliga’s works at Project 88, Colaba