Two editors from Locust Review, Alexander Billet and Adam Turl, will be speaking on art related topics in London at the annual Historical Materialism (HM) conference (November 7 – 10, 2019), sponsored by the Historical Materialism journal and book series. Turl has organized a panel with fellow artists Anupam Roy and David Mabb (more information below). Other LR editors will also be speaking on matters not directly related to art and aesthetics (but still awesome) and attending the conference as well. Holly Lewis will be speaking on two panels, presenting on “Queer Liberation and Marx’s Ecology” and acting as a discussant for the book launch of Ashley Bohrer’s Marxism and Intersectionality: Race, Class, Gender, and Sexuality under Contemporary Capitalism (2019). In addition, Adam Turl’s fellow editor at Red Wedge Magazine, Jordy Cummings, will be presenting, as part of the “Leftovers Live” series, on  “Bruno Bauer, Class Reductionist: A Strategic reading of On the Jewish Question in 2019.” The theme of this year’s HM is “Claps of Thunder: Disaster Communism, Extinction Capitalism, and How to Survive Tomorrow.” See below for more information on the art and aesthetics presentations (basically we copied and pasted the “abstracts.”) The exact schedule for the conference is forthcoming. Copies of Locust #1 will be available at the conference. 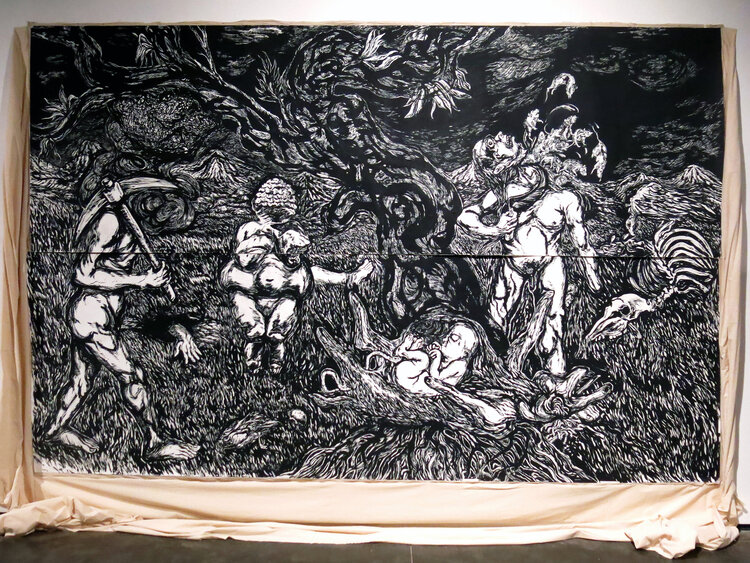 “We have to search for the real image. So, for example, I’ve used the Venus of Willendorf in my work. For me, that image is an historical image, holding in a way the history of women’s bodies. So, in my work, the Venus of Willendorf has a broken breast not to represent Nangeli (an Ezhava-lower caste woman, this is related to the Brahminical imposition on the Dalit community where the women were not supposed to cover their breasts. Nangeli covered her breasts. When the tax collector came she cut off her breast and paid her taxes with it). Rather, I try to capture the presence of this historical act. To understand the historical relevance of Nangeli or her particular subversive act, we have to understand that her individual assertion comes from the historical and collective consciousness. We are not going to use the same metaphors, the same kind of reality, which are used by the upper caste and the ruling class. We have to identify the real image – if we really are with the people, or on the people’s side, then we can visualize and realize our images, and we don’t have to bother about the superficial Brahmin-upper caste metaphors. Counter image, untimely image, true image can only come from the real people.”