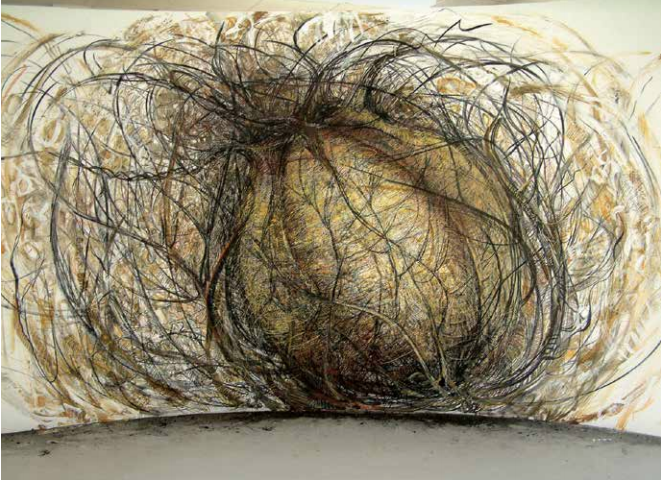 Seed, by Rohini Devasher, 2004. Charcoal, acrylic, colour
pencil, oil pastel, wood; 245 x 457 cm. “Seed” is the first of several wall drawings that explore landscape as a living entity. Through the process of the drawing, done on site over three months, the relationship between the drawing and the forms from which it is derived is gradually blurred. The curve of the wall further heightens the sense of being engulfed, of being destabilized.

…for that which we imagine must be either something already seen or a composite of  things and parts of things seen at different times; such are sphinxes, sirens, chimeras, centaurs etc. —Galileo Galilei, Sagredo quoted from the Dialogue Concerning the Two Chief World Systems (Dialogosoprai due massimisistemi del mondo), 1632.

British artist Paul Morrison has described his interest in “cognitive landscape. the terrain
that one sees, somewhere behind the eyes”. This idea of a landscape that looks back, of a
nature that is non-passive, in turn idyllic, uncanny, threatening and seductive, is something I have been working with for some time now.
My training as a printmaker provided the foundation for my interest in self-organization
of pattern in nature. This led to experiments with video-feedback and the idea of the gradual articulation of a surface became the means to construct something entirely new.
Similar to kaleidoscopes, video-feedback is created when an ordinary hand-held camera
is plugged into a TV and pointed at itself. The optical equivalent of acoustic feedback, a
loop is created between the video camera and the television screen or monitor. Through a
process of trial and error, it becomes possible to explore a vast arena of spontaneous pattern generation by varying the available controls (brightness, contrast, hue, focus, camera angle etc.). The result is an amazing array of spatio-temporal patterns, mimicking those exhibited by physical, chemical and biological systems, i.e. plant structures, tree forms, bacteria, snowflakes.

What happens in the case of mutation? Consider the example of the genetic code. Mutation normally occurs when some random event (for example, a burst of radiation or a coding error) disrupts an existing pattern and something else is put in its place instead. Mutation is crucial because it names the bifurcation point at which the interplay between pattern and randomness causes the system to evolve in a new direction.
—N. Katherine Hayles, How We Became Posthuman: Virtual Bodies in Cybernetics, Literature, and Informatics, University of Chicago Press, 1999.

Where Freud held that the uncanny is very often neither supernatural nor particularly
mysterious in its origin, but rather, completely familiar, conversely I am interested in working with material that is….