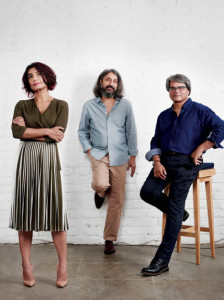 “The Yokohama Triennale has named Raqs Media Collective, the New Delhi–based group formed in 1992 by Jeebesh Bagchi, Monica Narula, and Shuddhabrata Sengupta, artistic director of its seventh edition, which will open in July 2020. Raqs is known for producing work across a range of media that often explores the intersection of art, philosophy, and historical inquiry. Among the collective’s recent curatorial projects are “In the Open or in Stealth: The Unruly Presence of an Intimate Future” (2018–19) at the Museu d’Art Contemporani de Barcelona; the Eleventh Shanghai Biennale (2016–17); and “INSERT2014: The Sharp Edge of the Global Contemporary” (2014) at the Indira Gandhi National Centre for the Arts in New Delhi.

Commenting on the appointment, Asada Akira, chair of the selection committee, said: “Raqs Media Collective was selected due to our belief that their experience as artists in a variety of places, including Japan, and their proven ability and flexibility as curators would lead to the realization of a truly unique triennale.” He added: “Among many other issues, the committee discussed the fact that most domestic art festivals have been dominated by Japanese male directors. And as it happened, we settled on an Indian collective of mixed gender. It is my belief that the appointment of Raqs Media Collective will not only serve as an inspiration for the Yokohama Triennale, but also for the Japanese art scene as a whole. With this in mind, one might say that the triennale’s new direction began with the selection process.”

The selection committee comprised Akira, director of Kyoto University of Art and Design’s Graduate School Academic Research Center; Mika Kuraya, chief curator of the Department of Programs Development at the National Museum of Modern Art, Tokyo; Eriko Osaka, director of the Yokohama Museum of Art and executive chair of the organizing committee for the Yokohama Triennale; Noi Sawaragi, a professor at Tama Art University, Tokyo; and Kiyokazu Washida, president of Kyoto City University of Arts and director of Sendai Mediatheque…”