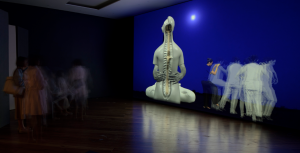 Raqs Media Collective, “Not Yet At Ease”

“It is the work of a Delhi-based group, Raqs Media Collective, and is entitled Not Yet at Ease. (See Top Photo)  It forms part of the commemoration of World War I, viewed from a different angle from what has been offered so far on this theme here in Britain. As a press release tells one: ‘Not Yet At Ease explores the history of psychological disorders resulting from conflict and the stigmas attached to them… Raqs Media Collective have based this new work on their theory that the symptoms of ‘shell shock’ were first observed by military censors, who noticed a tendency among some Indian soldiers to break out spontaneously into ‘poetry’ in the letters they wrote from battlefields, barracks and hospitals. Not Yet At Ease gives voice to these words.’ And, one might add, offers deeply moving images as well

All this may sound daunting, still more so because the visitor is led on a winding path into a very large installation. As one proceeds, one looks through horizontal slots in what may be padded doors, as if one was making one’s way through an institution where mental patients are confined. What one sees through those slots are the dreams and fears of men who were thrown into a conflict that was a long way from their own native territory, and an equally long way from the culture that originally nurtured them.

The great advantage is that the visitor can experience this at his or her own pace. Also, that you needn’t, if you don’t want to, adhere to any fixed narrative sequence. The experience is very different from the ‘Sit there a pay attention to nanny’ currently exemplified by the Turner Prize videos currently on offer at Tate Britain. The Tate videos, first to last, will take you five hours, However, if you are based in London, you could, with a bit of luck, catch a train to Colchester, get yourself to First Site, see Not Yet at Ease, and get yourself home within about the same length of time.

Sorry folks, I’m in no doubt which of these I’d rather do. A trip to Colchester every time. Even if, as happened in my case, British Rail Sunday services were fucked up, and the trip was first the train, then quite a long stretch on a bus.

The images I saw were not only moving in themselves but thought-provokingly mysterious. As well as adding something new to the well-worn story of the war, they offered a ticket of admission to a different mindset. Not many works of art, contemporary or other, are guaranteed to do that.