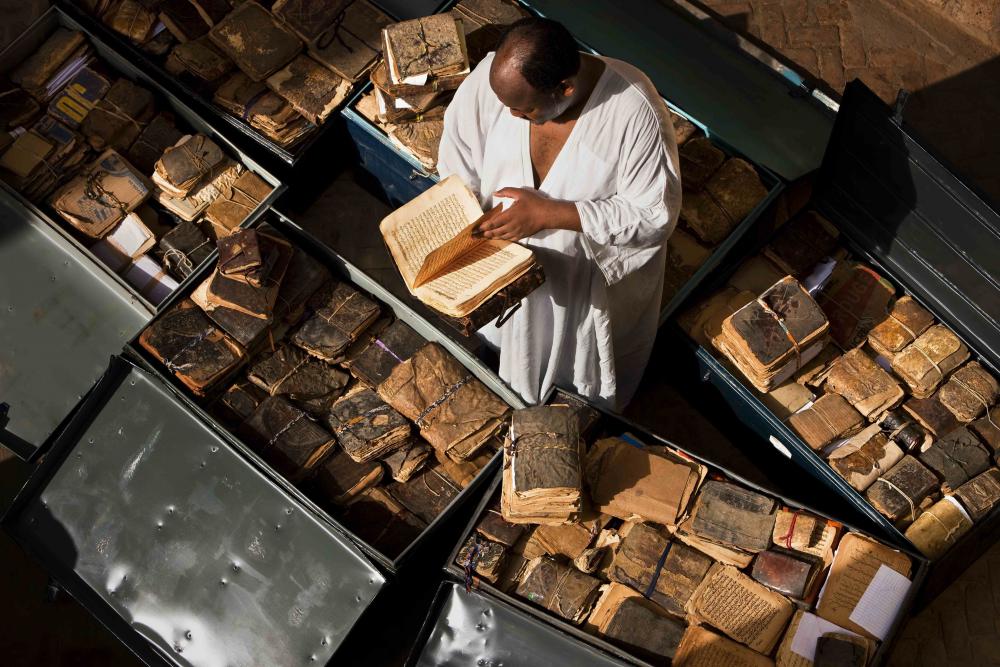 Abdel Kader Haïdara, a librarian who smuggled hundreds of thousands of manuscripts from jihadist-occupied Timbuktu to safety in Bamako, stands with ancient volumes from Timbuktu packed into metal trunks. Photo: Brent Stirton/Getty Images.

Man was born free, and everywhere he is in chains.1

Dear Sean,
I have been asked by Raqs Media Collective to contribute to a special ongoing issue of e-flux journal that is part of the Venice Biennale. Raqs’s section in the issue rethinks Rousseau’s social contract and the possibility of its being rewritten, as a way of imagining social bonds and solidarities that can help instigate and affirm a vision of the world as a space of potential.
I was wondering if you would join me in a conversation on shadow libraries and social contracts. The entire universe of the book-sharing communities seems to offer the possibility of rethinking the terms of the social contract and its associated terms (consent, general will, private interest, and so on). While the rise in book sharing is at one level a technological phenomenon (a library of 100,000 books put in PDF format can presently fit on a one-terabyte drive that costs less than seventy-five dollars), it is also about how we think of transformations in social relations mediated by sharing books.

If the striking image of books in preprint revolution was of being “in chains,” as Rousseau puts it, I am prompted to wonder about the contemporary conflict between the digital and mechanisms of control. Are books born free but are everywhere in chains, or is it the case that they have been set free? In which case are they writing new social contracts?

I was curious about whether you, as the founder of Aaaaarg.org, had the idea of a social contract in mind, or even a community, when you started?

Click below to read more:
Sean Dockray & Lawrence Liang — SHARING INSTINCT: AN ANNOTATION OF THE SOCIAL CONTRACT THROUGH SHADOW LIBRARIES