Combining illustrations and radio recordings, Sarnath Banerjee’s new exhibit is a fictional account of a Mumbai we don’t see.

In the central hall of Dr Bhau Daji Lad (BDL) Museum in Mumbai, is a giant panel featuring Thomas Browne, an English polymath from the 17th century, and naturalist Charles Darwin (a nod to Sarnath Banerjee’s former works and BDL’s previous life as a museum of natural history). Upstairs, in a room with chiaroscuro lighting, is a cabinet filled with an assortment of strange, even macabre, objects — from a man’s head and an ancient sword to a book on Arabic surgeries. Interspersed are sound installations, narrating fictional, often horrifying, tales. The Berlin-based artist and graphic novelist’s first museum solo, Spectral Times, combines text, illustration and a ‘radio’ component to create an exhibition that is simultaneously elaborate and eerie. 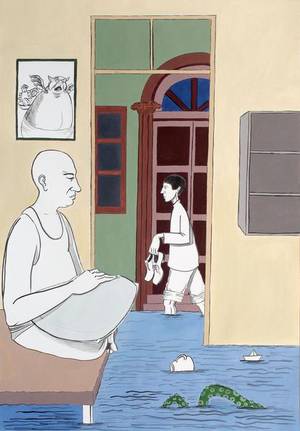 Installed amidst BDL’s collection, with items pulled from its archives to complement his work, Banerjee describes the exhibit, which opened last weekend, as a ghost story. “As I see it, ghosts are a revisiting of incomplete speech. No matter what actions you have justified with your intelligence — murder, caste-based politics, lynching — they come back to remind us of how things are. We need ghost stories for our contemporary times because that is the real commentary,” says the 46-year-old.

An alternate reality
Curated by Tasneem Zakaria Mehta, Managing Trustee of BDL, with assistant curator Himanshu Kadam, the exhibition is part of the museum’s decade-long series, Engaging Traditions, which invites contemporary artists to engage with its archives and history. This time around, the result is an uncanny ‘enchanting’ of the space and its artworks, with a few nods to Banerjee’s new book, Doab Dil, and everyone’s favourite protagonist, Digital Dutta — the scrawny, helmet-haired North Kolkata gentleman who appears in many of his stories, starting from his first, Corridor.
“What I love about Sarnath’s work is his ability of looking at reality at a tangent,” says Mehta, speaking of the show’s intent to explore ‘storytelling’ as a medium by working with narrative, visuals, sound and performance. She considers Spectral Times akin to a modern-day fairytale, though with anomalous endings.

Banerjee, however, would like to think of it more as a news periodical on Mumbai, edited by a fictional fact-checker, Barjis Bahri. “They’re all imaginary interviews with people who’ve allegedly had otherworldly experiences. And these experiences are like ‘post-truths’,” he says. While he originally intended to use documentary interviews he had done with historians, anthropologists and conservationists in Mumbai, he felt the need to create stories around them, to bring in notes of the ‘spectrality’ he wanted. Like Shehri Adamkhor. The interview of the former Delhi boy (which you can listen to in the room of curiosities) begins with the anxiety of shifting cities, and ends with him telling Bahri about his cannibalistic inclinations. In another story, Fidaly Mansion, every memory of every haunted house you’ve known is reprised, but with subtexts of communal tension.

Banerjee’s new book, Doab Dil, is a treatise on the mundane and the far-away. It came about after he found himself engaging with non-fiction writing, from Rebecca Solnit’s Wanderlust to Indian historian Vedica Kant’s book on the rarely explored stories of Indian soldiers during the First World War. In 11 poetic chapters, of what he calls “an archive of my readings around nature”, he contemplates everything from gardens and their importance in society, to walking, peregrine falcons and Japanese print-making. 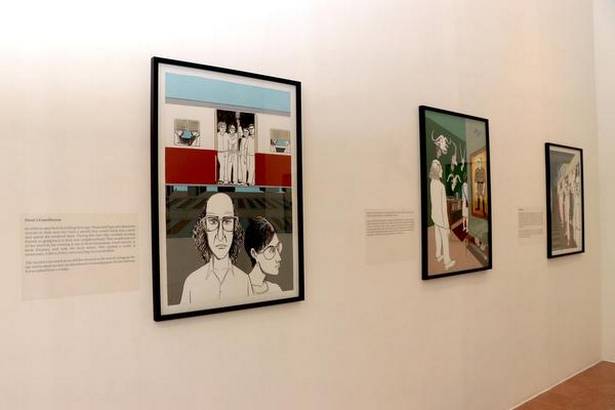 Listening in
Banerjee’s interest in working with locational histories runs through much of his work — from Corridor, which engages the heart of Lutyens Delhi through the eyes of a streetside bookseller, or The Barn Owl’s Wondrous Capers, where an alternative history of Kolkata is told through a series of fascinating characters. “My politics is always insidious; I don’t like direct activism,” he says.

But why Mumbai? “It has an easy modernity. However, despite all its cosmopolitanism, it is also a cop-out. Divisive conservative politics, hyper-locality and identity politics took over so quickly, and the push-back by the ‘gentle civil society’ wasn’t really great,” he says, highlighting how the idea of a metropolitan city of dreams is fast eroding and being replaced with a sense of unease.

The subject also lent itself to radio recordings, besides his minimalist sketches. “We get our stories from a single medium nowadays, mostly video. But as a thinking person in this over-saturated world of visuals, radio allows you to imagine the whole scenario. And the rendition is yours, without any of the editing that video would bring in,” he says. Somewhere in the near future, he hopes to open radio salons, where people can sit down and listen to various pieces because “storytelling is important, and I like the magic of it”.