THE GHOSTS OF OUR PRESENT- THE ASIAN AGE 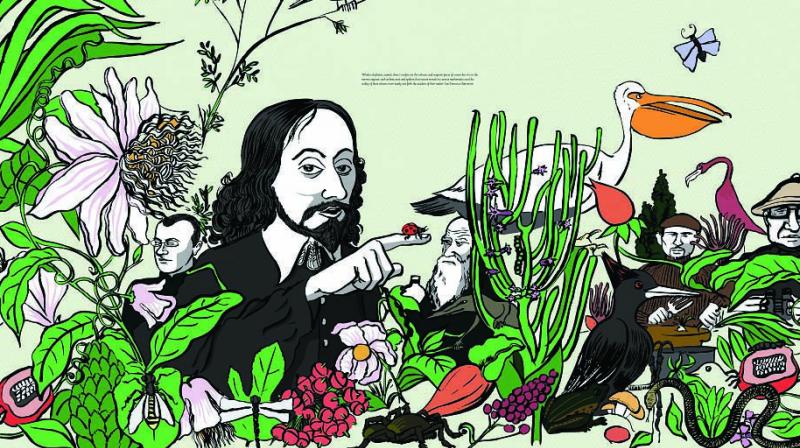 From the series, ‘An Encounter with Thomas Browne and Other Commonplace Utopia’, (Photo: Deutsche Bank, The artist, & Project 88, Mumbai)

These stories can be enjoyed through both, Sarnath’s minimalist graphic sketches as well as radio recordings.

Ghost stories have been a childhood staple for many of us, and graphic novelist Sarnath Banerjee’s latest exhibition, Spectral Times, being held at Dr. Bhau Daji Lad Mumbai City Museum, is an absolute treat for all those fascinated by the macabre and the morbid. But this being said, the exhibition isn’t just about spooky tales and cheap thrills, because the exhibits engage your mind as much as they do your emotions and senses.

Picture this: You walk into a room filled with chiaroscuro lighting. To the right is a cabinet filled with an assortment of strange, inanimate objects, like a man’s head, an ancient sword, a time-worn book and others, extracted from the annals of time. To the left are vintage paintings that document people from bygone eras. This is the room in which the visitor will be treated to the radio story of Shehri Adamkhor, a man who develops a cannibalistic instinct and cannot stop himself from fantasising about cooking and eating his friends and family. And Shehri Adamkhor is just one of the many eerie, surreal, otherworldly stories gathered by Birjis Bari, an ex-fact-checker and current tonal reporter for the local quarterly magazine, The Spectral Times, which collects such stories.

“Yes, this is a horror story, in a sense, but it’s also a story about human anxiety. It’s about that nagging thought that we’ve all grappled with at some time or the other – what is that line beyond which a quirk enters the realm of unacceptable insanity? What happens when you cross that line?” asks the author of critically acclaimed graphic novels like Corridors and The Barn Owl’s Wondrous Capers. And such subtexts permeate all the stories in the exhibition, like Fidaly Mansion, which resurrects the spectre of communal tension, or Home, which sheds light on the silenced atrocities that permeate many a home or When Floods Recede, which rakes up the negativity class wars can elicit — stories that seamlessly and slyly merge the realisations of an awakened mind with dark humour.

These stories can be enjoyed through both, Sarnath’s minimalist graphic sketches as well as radio recordings. In this way, the exhibition, quite beautifully and unsettlingly, marries visuals with sound. Apart from the Spectral Times tales, there’s also a set of illustrations born out of Sarnath’s time in Japan and his musings about ginger, a supremely important spice in erstwhile times. (Heads up: Wars were fought over it)

“Ghost stories are not just about sending chills down the spine, it’s about the context and the build-up that accompanies these stories. Very often, these stories have at its core unresolved issues and feelings, questions and thoughts that have been stifled or silenced – the denying of certain realities or truths. These unanswered issues and silenced realities, whether political or personal, come back to haunt you. These are the ghosts that ‘come back from the dead’,” explains Sarnath, when we ask him what about ghost stories fascinates him.

The author also tells us why he chose the medium of radio to narrate these stories. “Videos take away the suspense, also they’re too much; video is like the people who stand outside theatres and seduce you to come in and watch the film. Audio, on the other hand, slows you down and forces you to concentrate. Radio stories are more intimate and they give you the chance to visualize characters and settings. They prod you to engage with the story,” opines Sarnath. The artist intends to popularize the medium of radio stories by holding similar exhibitions at different places in the city, while also experimenting further with the medium.

As you move from room to room in the museum, there’s another realisation that strikes you that the museum is the perfect home for Spectral Times, for it too holds treasures of the past, thus making them a part of our present. Curators of the exhibition, Tasneem Zakaria Mehta and Himanshu Kadam, have even chosen aesthetically and temporally relevant objects to pair with the various exhibits, like the objects in the room where the story of Shehri Adamkhor unfolds, and several others. However, Tasneem warns us not to think of museums as spaces that hold ‘dead objects’, because exhibitions like these give new meanings and associations to ancient objects, keeping them always relevant and alive — just like the specters in Sarnath’s stories.