Posted on 22 December, 2014 in Outlook Magazine 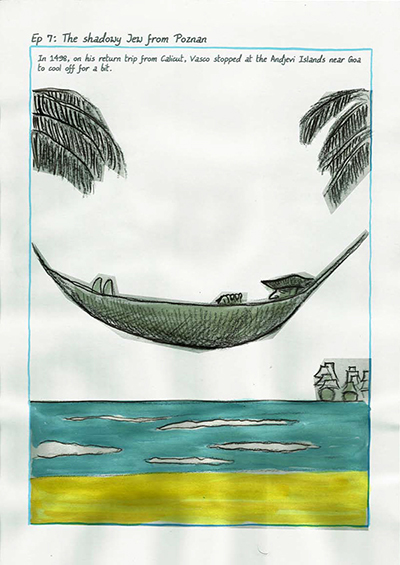 “Graphic novelist Sarnath Banerjee toys with the idea of history as perceptual hallucination with his work, Liq­uid History of Vasco Da Gama 2014. Spread out as a single scroll of 36 pages, ‘Vasco’ history is written by an unreliable clerk called Digital Dutta who doubles up as a history writer after taking his daily dose of opium. Sarnath completely refutes the objectivity of history writing here. The novelist says that most historians emphasise on the truth of their work but his protagonist Digital Dutta is lying through his teeth, exercising his falseness. “History is subjective writing. And if your voice is louder and sexier, then it is heard. Dutta has a tendency to plant himself in various historical moments—either as a minor character or as an active agent responsible for changing the course of history. History-wielders are truth- mak­ing machines and claim history to shape the present. We have seen political powers doing this over and over…”