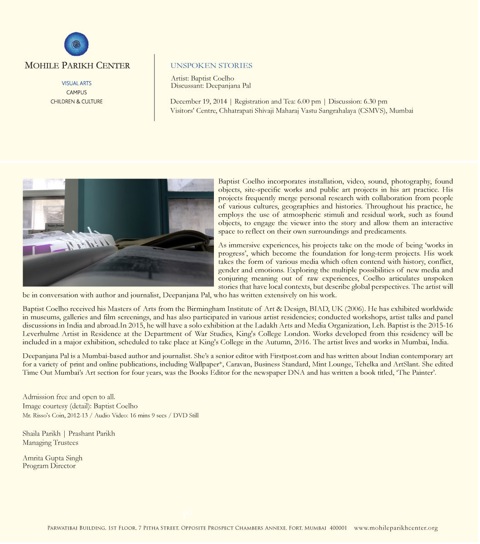 Baptist Coelho incorporates installation, video, sound, photography, found objects, site-specific works and public art projects in his art practice. His projects frequently merge personal research with collaboration from people of various cultures, geographies and histories. Throughout his practice, he employs the use of atmospheric stimuli and residual work, such as found objects, to engage the viewer into the story and allow them an interactive space to reflect on their own surroundings and predicaments.

As immersive experiences, his projects take on the mode of being ‘works in progress’, which become the foundation for long-term projects. His work takes the form of various media which often contend with history, conflict, gender and emotions. Exploring the multiple possibilities of new media and conjuring meaning out of raw experiences, Coelho articulates unspoken stories that have local contexts, but describe global perspectives. The artist will be in conversation with author and journalist, Deepanjana Pal, who has written extensively on his work.