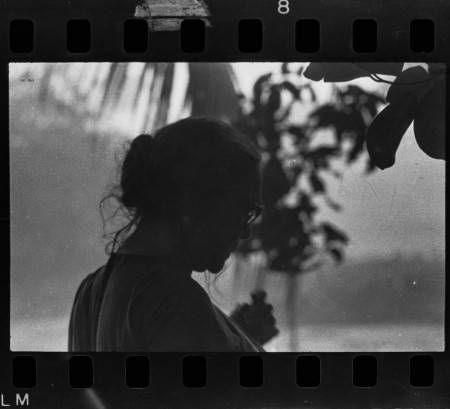 A pensive Meera at the end of a day in Elachi. December 1990. Photograph by Arun Ganguly

Project 88 is pleased to present Meera Mukherjee: Photographs by Arun Ganguly, an exhibition of extraordinary photographs from an unseen archive – jointly curated by Adip Dutta and Tapati Guha-Thakurta. Marking Meera Mukherjee’s centenary year, this show first opened at Galerie 88 in Kolkata, and will now make its way to Mumbai.

At the centre of these photographs is the theme of work and labour – and the intricacies and enormity of both in Meera Mukherjee’s techniques of making sculptures in the cire perdue (lost wax) metal-casting technique. Her indebtedness to the method learnt in Bastar flowed over to the community she

Unfamiliar neighbors at first, Arun Ganguly first met Meera Mukherjee in January 1978 at her Paddapukur home in Bhowanipur when he came to make colour transparencies of her work process for her upcoming lecture in Baroda. Setting up a parallel process of black and white photography for his own archives, he began extensively photographing Meera Mukherjee at work over several seasons of her sculpting, beginning in 1978 and resuming in full flow in the 1990s. His photographs poignantly carry over into the months after her death in 1998, when he ended his series by documenting the completion of her last unfinished work, a monumental seated Buddha, by the community she had trained and nurtured.