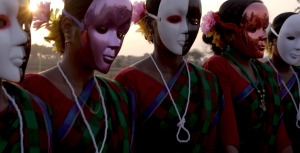 The Otolith Group, O Horizon, still, HD, colour, 81 minutes 10 seconds, 2018. Commissioned by Bauhaus Imaginista and co-produced with the Rubin Museum and the kind support of Project 88.

In their film O Horizon, London-based artist collective The Otolith Group — comprising Anjalika Sagar and Kodwo Eshun — explore what they describe as “Tagorean cosmopolitics”. “The film considers the complexity of Rabindranath Tagore’s pioneering vision for Santiniketan,” says Eshun, introducing the 90-minute film that discusses Tagore’s ethos and his emphasis on communion with nature. The experimental modes of learning and interdisciplinary approach he introduced meant to promote modernism and socio-political awareness.

The duo begin their portrayal with Tagore’s famous poem The Year 1400, written in 1896, where the polymath imagines his words travelling through time to be read in the next century. It is this very “trans-historical dimension” that forms the premise of the film. Tagore’s approach to institution-building — what he envisioned and what exists — is discussed through a study of Santiniketan and its surrounding areas, where the artists researched and filmed over five years. “It aims to situate people in times and scales in which soils and trees are not only grounds for education but figures of education,” says Eshun.

Since the collective was established in 2002, it has attempted to present alternate realities by fictionalising history. Its first film Otolith 1 (2003) was set in the 22nd century and featured a future descendant of Sagar researching extinct life on earth through collected archives. If the film Otolith III (2009) was born from Satyajit Ray’s unrealised science-fiction film The Alien, the 31-minute long film Hydra Decapita (2010) linked the present of financial capitalism to historical atrocities by basing itself on electronic music duo Drexciya’s 1997 album The Quest, where an underwater country is populated with the descendants of Africans who drowned while being transported in slave ships across the Atlantic. “The idea is to create a zone in which historical figures and fictional figures communicate with each other,” says Eshun.