Neha Choksi’s solo exhibition “Iceboat and Sky Fold” comprises two different works that are united by their exploration of transience. The first, a video based on a 2012 performance, takes viewers to a lake where a white-robed, shaved-headed Choksi is seen rowing a boat made entirely of ice. Much of the nearly fourteen-minute Iceboat, 2013, features footage of the artist navigating the water even as the vessel in which she sits is slowly consumed by its surroundings. The second, Sky Fold, 2013, is a series of eight works on paper that use the cyanotype process to create grid-driven studies of clouds in a blue expanse. 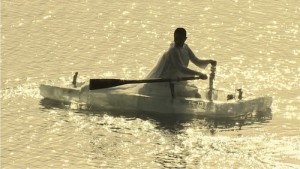