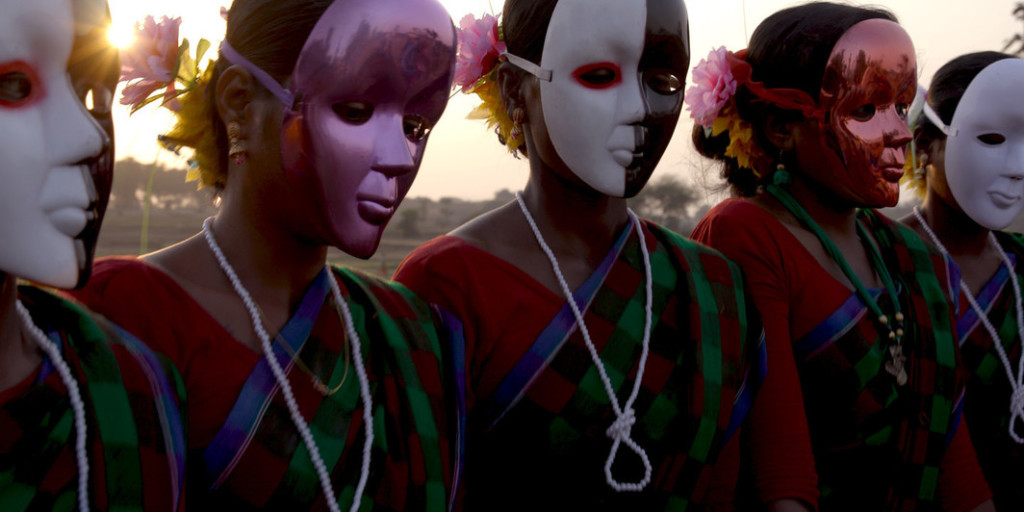 The Otolith Group’s latest video, O Horizon, 2018, comes out of a long-standing research interest in Rabindranath Tagore and his founding of Visva-Bharati, a school in Santiniketan, West Bengal, India, which was meant to be a living laboratory and an experiment in art, life, and craft. Here, the founders of the group, Kodwo Eshun and Anjalika Sagar, discuss their motivations for shooting on location and the Tagorean ethics that animate the work. O Horizon made its debut at the Rubin Museum of Art in New York, where it is currently on view through September 17, 2018. The work will travel to the National Museum of Modern Art in Kyoto as part of “bauhaus imaginista: Corresponding With” from August 4 to October 8, 2018.

SINCE 2008, we have engaged in ongoing research into Indophilia, which we might define as our fascination with the recurrent Euro-American fascination with scenes, events, moments, and figures fashioned from a phantasmic imaginary of Indian modernity. One such Indophiliac moment converges upon the aristocratic figure of Rabindranath Tagore during the opening decades of the twentieth century. As a polymath—he was a poet, educator, songwriter, dramatist, playwright, painter, and novelist—and the first Indian, indeed the first “non-Westerner,” to win the Nobel Prize in Literature in 1913, Tagore exemplified a charismatic ideal of synthetic spiritualism, holistic pedagogy, and vitalist aesthetics for a global audience of “Western” intellectuals. Looked at now, the elderly Tagore’s stylistic innovations of white robes, white hair, and white beard recall Peter Jackson’s approach to presenting Gandalf and Saruman in his Lord of the Rings trilogy. It is easy to imagine the spell Tagore must have cast over the impressionable white audiences that flocked to hear his lectures.

Tagore undertook tours of North America, South America, Southeast Asia, and Europe from the 1910s to the 1930s in order to raise funds for Visva-Bharati, which he founded in rural Santiniketan in West Bengal, India, in 1921. Tagore’s ecological philosophy, which later thinkers such as Félix Guattari might have described as an “ecosophy,” sought to integrate ideals drawn from Japanese and Chinese aesthetics into ancient Indian thought in order to create a so-called pan-Asian ethos for a new vision of education capable of exceeding that of the British colonial system. Visva-Bharati offered a means to realize what Partha Mitter calls Tagore’s “environmental primitivism,” which in many ways paralleled that of Johannes Itten’s and Wassily Kandinsky’s concerns with spiritual expression at the Bauhaus. Tagore wanted to learn from the so-called tribals, such as the Santals that lived in rural Bengal, in order to develop an experimental community in which art would be combined with nature through education. The aim was to engender and vitalize a cosmopolitan sociality and a holistic subjectivity that would surpass the alienation of colonial education imposed by British imperial rule.

We thought of Tagore’s ideas as different sides of a continually rotating sculpture. O Horizonis an attempt to produce a structure of feeling that would evoke that sculpture. It makes no attempt to claim any historical expertise. We consider ourselves students of art historians such as Partha Mitter, Geeta Kapur, Rustom Bharucha, Anshuman Dasgupta, Sanchayan Ghosh, and R. Siva Kumar, whose research on Tagore informed our thinking. More influential still were the amazing films of Ritwik Ghatak, such as Meghe Dhaka Tara (The Cloud-Capped Star) from 1960. O Horizon was not intended to engage in a revisionist hagiography of Tagore. We wanted to make a work from an outsider’s perspective. We thought of O Horizon as a study of study with all the multiple connotations entailed by the term black study—as in piano ètudes, as in Fred Moten and Stefano Harney’s ideas of study as “what you do with other people,” and as in Nicole Brenez’s ideas on visual study as a “study of the image by means of the image.” If Visva-Bharati was a pioneering example of what Tom Holert calls a learning laboratory for the “social production of a pedagogical space,” then what we wanted to understand was its singularity. We were listening for emergent feelings that were not necessarily articulated through a specialized Tagorean vocabulary. The long production process allowed us to sensitize ourselves to the ambient environment of the Visva-Bharati campus in which a Tagorean ethos exists at a diffused level, occasionally crystallizing in the form of modernist …..
– As told to Lauren O’Neill-Butler