WHOSE TRUTH IS IT ANYWAY? – ZAHRA AMIRUDDIN 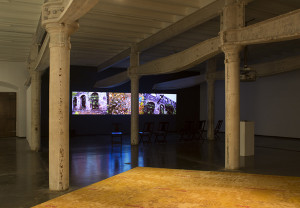 Pallavi Paul, ‘Not a Simple Disappearance, but a Slow Dissolution,’ Installation View

We often drift in between the realms of dreams and reality. Sometimes watching stories in our minds play out, or recreating them when they change their narrative. Artist Pallavi Paul, delves into history and one’s own subconscious, to ask us, “Does one employ an image as an incomplete procedure – caught between the lived and the written?” Using the medium of cinema, drawings, and tapestry, Paul addresses questions of resilience, violence and the agility of thought in her second solo exhibition, Not a Simple Disappearance, but a Slow Dissolution.

Over the course of two years (2016-2018), Paul began to use non-fiction to mull over aspects of verifiability and factuality. As the exhibition was developed over time, it then became a gathering of voices that she explored using various surfaces. In a three-channel video installation titled, ‘Cynthia Ke Sapne / The Dreams of Cynthia’ (42 min) that recently played as part of The New Medium III section at the recently concluded Mumbai Film Festival, Paul fuses art history and cinema.

“She woke up to see yesterday’s dreams crawling on the outside,” reads a text panel in her film. On first watch, the film feels like a series of simultaneous occurrences, that one can only truly bind together on a second viewing. The movie chases the inner life of its protagonist Cynthia, who as Paul explains, “is at once imagined as a literary character, a measure of time, a form of experience, and a landscape.” As it is explained in the curatorial note, Cynthia bears witness to the lives of two people — an executioner and a trans artist whose lives are intertwined within a small town in North India, through an informal history of labour, violence and death.

The work that’s part of the larger exhibition, took three years to complete, and uses a Hindi poem of the same name by poet Anish Ahluwalia, to merge fiction and non-fiction. Since the film talks about industries, labour, and the film world, it’s been shot around the crumbling post-industrial landscape of towns like Meerut and Dadri. “These areas were deeply riled with post-Independence communal violence, and so, while I didn’t want to mention their names in the film, I wished to generate a similar sensation,” explains Paul.

“Encircled by these dreams, who is Cynthia?” reads another text panel in the film. The artist was keen to create a tension within the documentary image that has long been a symbol of truth. “I don’t actually know who Cynthia is, but I like to think of her as a host,” says Paul who further elucidates about how her protagonist, is used to conjure thoughts that go beyond the boundaries of the film.

In Paul’s series of sketches titled ‘Elsewhere’, she makes delicate line drawings of “things to do.” Playing with the idea of language and thought, each picture stems from a word with a definition. Like in an illustration of a sewing machine with the text — “soch (nf): anxiety, brooding, musing; consideration,reflection.” Or in a found-photo with half a woman’s face, that Paul uses as a canvas to create more art. “While it’s a making of an image, it’s also a desecration of an existing image that has been ripped apart. Tethering between an act of destruction and construction, it’s a loop. The beginning or a close of something,” explains Paul.

The artist’s initial plan was to use illustrations as animations in her film. She developed them as storyboards for Cynthia Ke Sapne, but since they weren’t ideas that could be captured on camera, Paul decided she would scan them into the moving image. “I was trying to make a form of imagery that could add to the cinematography.

Since the film uses a lot of text, I was thinking of these words as a material extension of the text in the movie,” says Paul. However, they were eventually edited out, and hang on the walls as conversations with the running film.

Lying on the floor in the midst of the room, is another conversation starter. A golden tapestry with words like ‘trap,’ ‘hope,’ ‘nostalgic,’ ‘break,’ and ‘vision,’ written in red, and surrounded by a repeating motif, ‘secret’. Recently exhibited at the Fitzwilliam Museum in Cambridge, the tapestry named ‘Terra Firma,’ is Paul’s response to ideas of truth, secrecy and espionage.

The trigger for the work was in 2014, when the artist was given the opportunity to work at the National Archives in London. Having come across Jonathan Byrne’s project on the oral histories of Bletchley Park spies, Paul was interested in the transformation of truth. “To hear former secret agents and other workers of Bletchley Park, who are now well into their 90s, trying to narrativise their experiences became the basis of ‘Terra Firma’,” she shares. The artist was interested in the kind of words they used to describe a memory, eventually leading to thoughts of how reality is often distorted by personal experiences. Thereby, creating a never-ending cycle of historic facts and one’s own truth.

Not a Simple Disappearance, but a Slow Dissolution, is currently ongoing at Project 88, Colaba until November 28…”